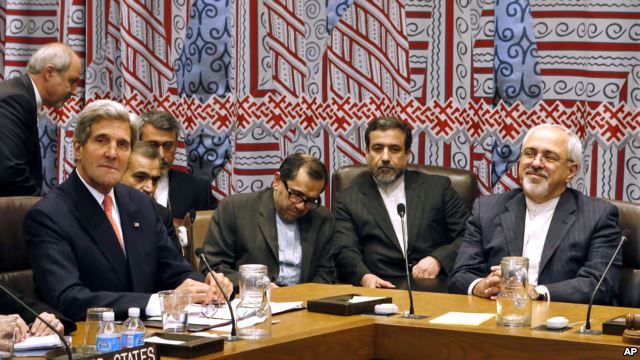 TEHRAN (Tasnim) – US secretary of state John Kerry is in London on Sunday and Monday for talks on Iran with EU foreign policy chief Catherine Ashton, and on Syria with peace envoy Lakhdar Brahimi.

Kerry flew into London on Sunday from Kabul, at the end of a 10-day trip around Asia.

He was due to have lunch with Ashton on Sunday behind closed doors to discuss Iran’s nuclear programme, a State Department official told reporters travelling with Kerry, AFP reported.

The lunch comes ahead of fresh talks between world powers and Iran.

The two-day meeting in Geneva, starting Tuesday, will be the first such negotiations since Hassan Rouhani took office in August.

Iranian foreign minister Mohammad Javad Zarif will negotiate with Ashton and the so-called P5+1 group of the United States, Britain, China, France and Russia plus Germany.

The US is sending Wendy Sherman, the under secretary of state for political affairs.

On Monday morning, Kerry was to meet Brahimi, the United Nations-Arab League envoy on Syria. They were also due to speak to press, the State Department said.

Their talks will likely revolve around preparations for long-stalled so-called “Geneva-2” peace talks aimed at finding a political solution to the conflict in Syria.

The United States and Russia have been trying to bring together members of President Bashar al-Assad’s government and rebel representatives for a Geneva conference following the failure of a first round of talks in June.