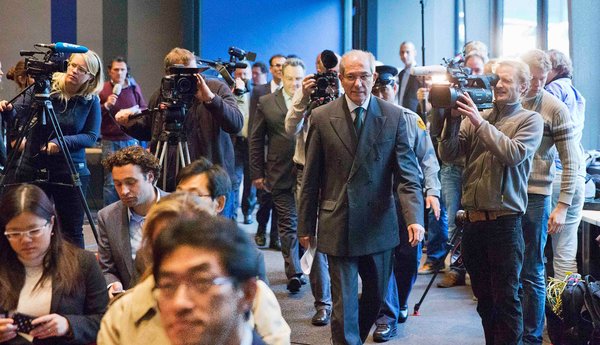 LONDON — Urging the destruction of an “entire category” of unconventional weapons, the Norwegian Nobel Committee awarded its 2013 Peace Prize on Friday to a relatively modest and little-known United Nations-backed body that has drawn sudden attention with a mission to destroy Syria’s stocks of chemical arms under a deal brokered by Russia and the United States.

The award to the body, the Organization for the Prohibition of Chemical Weapons, based in The Hague, took some Nobel watchers by surprise partly because of the unprecedented nature of its current task: overseeing the destruction of a previously secret chemical weapons program quickly amid a raging civil war.

“We were aware that our work silently but surely was contributing to peace in the world,” Ahmet Uzumcu, the director general of the organization, told reporters in The Hague after the award was announced. “The last few weeks have brought this to the fore. The entire international community has been made aware of our work.”

Among diplomats, the prize was seen as the high point of a startling rise to prominence for an organization that has worked in relative obscurity. Some Syrians, however, took strong exception to the idea of lauding chemical weapons watchdogs when the bulk of the more than 100,000 fatalities in Syria’s civil war have been caused by conventional weapons, like airstrikes, artillery and rocket fire.

Despite the urgency and danger of its task, the organization had not been tapped as a likely winner. In the days leading up to the award, much attention had focused on individual candidates, including Malala Yousafzai, the 16-year-old Pakistani student who risked her life to campaign for girls’ education and would have been the youngest recipient ever.

In its citation, the committee said the organization and the treaty under which it was founded in 1997 “have defined the use of chemical weapons as a taboo under international law.”

“Recent events in Syria, where chemical weapons have again been put to use, have underlined the need to enhance the efforts to do away with such weapons.”

It was the second successive year that the panel, based in Oslo, chose an organization for its accolade. The European Union won the 2012 prize.

Inspectors from the 189-member group began arriving in Syria early this month after a chemical weapons attack that has been strongly linked to the Syrian government killed hundreds of people in the outskirts of Damascus, the Syrian capital, on Aug. 21. Under the Russian-American agreement, Syria agreed to join the treaty banning chemical weapons and become the 190th member of the organization.

Mikhail S. Gorbachev, the former Soviet president and the winner of the 1990 Nobel Peace Prize, hailed the award. “O.P.C.W. has worked tirelessly to rid the world of chemical weapons, and the organization is a deserved winner of the Nobel Peace Prize,” Mr. Gorbachev said in a statement issued by Green Cross International, a Geneva-based advocacy group he founded that has collaborated closely with the chemical weapons watchdog.

Angela Kane, the top disarmament official at the United Nations, who worked with the O.P.C.W. to lead an investigation into the Aug. 21 attack and other suspected uses of chemical weapons in Syria, also said the award was well-deserved.

“If he were alive today, Alfred Nobel would be gratified indeed that his Committee has once again recognized disarmament for its great benefit to humanity,” she said in a statement. “Its strong message is well received: weapons of mass destruction must be eliminated. There is always worry that they could fall into the wrong hands, but as we know, there are no right hands for the world’s most horrific weapons.”

Thorbjorn Jagland, the former Norwegian prime minister who is chairman of the Nobel Committee, said chemical weapons had been used by Hitler’s armies in their campaign of mass extermination and on many other occasions by states and terrorists. He denied suggestions that the award to a body based in The Hague represented a Eurocentric shift after last year’s award to the European Union. “It’s global,” he said.

The organization’s mission is to act as a watchdog in implementing the Chemical Weapons Convention, which came into force in 1997 with four aims: to destroy all chemical weapons under international verification; to prevent the creation of new chemical weapons; to help countries protect themselves against chemical attack; and to foster international cooperation in the peaceful use of chemistry.

The body has a technical staff of around 500, according to its Web site, and an annual budget of around $100 million. Its members cover 98 percent of the global population land mass, as well as 98 percent of the worldwide chemical industry, it says.

Since its creation, the organization has sent experts to carry out 5,000 inspections in 86 countries, working discreetly, almost shunning publicity, with the small number of signatory countries that acknowledge possessing chemical weapons. By far the biggest of these are Russia and the United States. Four countries besides Syria have not yet signed or ratified the treaty: Angola, Egypt, North Korea and South Sudan. Israel and Myanmar have signed the treaty but their state governments have not ratified it.

Although it attracted some notice when it sent experts to tackle the chemical arms held by Col. Muammar el-Qaddafi, the Libyan leader, nothing had prepared the organization for its mission in Syria.

The operation is unparalleled in both its urgency and its hazards. The United Nations Security Council has set extremely tight deadlines for the mission, calling for the destruction of Syria’s arsenal of dangerous toxins by mid-2014 in the middle of an intense and violent conflict.

Nobel nominees are shrouded in secrecy. Apart from Ms. Yousafzai, another front-runner was said to have beenDenis Mukwege, a gynecologist who has treated rape victims in the long-running conflict in his native Democratic Republic of Congo.

The award of $1.25 million will be presented on Dec. 10, the anniversary of the death of its founder, the Swedish industrialist Alfred Nobel, who established the prize in 1895 in his will. It was the 94th to be awarded since his death.

While much attention is focused on Syria’s chemical weapons stocks, the Nobel Committee noted pointedly that other countries — including the United States and Russia — had not dismantled their chemical arsenals.

“Certain states have not observed the deadline, which was April 2012, for destroying their chemical weapons,” the committee said. “This applies especially to the U.S.A. and Russia.”

“Disarmament figures prominently in Alfred Nobel’s will,” the committee added. “The Norwegian Nobel Committee has through numerous prizes underlined the need to do away with nuclear weapons. By means of the present award to the O.P.C.W., the committee is seeking to contribute to the elimination of chemical weapons.”

Mr. Jagland said the award would remind nations holding major stocks of chemical weapons to destroy them, “especially because they are demanding that others do the same, like Syria.”

Some analysts said the award enabled the Nobel Committee to evoke the civil war in Syria without directly taking sides.

United Nations inspectors who examined the Aug. 21 attack site outside Damascus did not specify which side in the civil war had carried it out. Many Western experts and governments, citing forensic details in the weapons inspector report on Sept. 16, have blamed Syrian forces, while President Bashar al-Assad has maintained that the rebels trying to overthrow him must have been responsible.

The official Syrian state news agency offered no immediate comment on the award. But the online reaction from many Syrians and others following the Syrian conflict was swift and full of outrage.

At best, many compared the motivations behind the award to those behind the awarding of the Nobel Peace Prize to President Obama in 2009 when he had only recently taken office: as an expression of hope for future success rather than a reward for solid achievements. At worst, critics said the decision was a travesty, given that Syrians across the political spectrum consider the chemical weapons issue a sideshow in a war that has killed more than 100,000 people, almost all with conventional weapons, since it began as a civilian revolt in March 2011.

Antigovernment protesters in the northern Syrian town of Kafranbel, who have made a name for themselves with their witty, English-captioned posters and slogans, posted a quick response.

Young men held a drawing that showed bombs falling, smoke rising over towns and corpses lying in blood, and, in the center of it all, a blue-helmeted United Nations worker triumphantly holding a wrench over a dismantled chemical warhead. Off to the side, an arm labeled “U.S.A.” gives the thumbs-up signal.

The Nobel announcement also played into a tangle of regional and international rivalries.

Speaking in Moscow, Foreign Minister Sergey V. Lavrov said Russia, President Assad’s biggest international sponsor, insisted that the transfer of Syria’s chemical weapons to international control take place according to schedule. But he accused other countries, some neighboring Syria, of trying to derail the initiative.

The responsibility for the process is held, he said, “not only by the Syrian government, but by all the other sides in Syria, by the entire opposition, and also by other countries. Above all, those countries that neighbor Syria, and which are forbidden to use their territory for any games with chemical weapons.”

Ryan C. Crocker, a former United States ambassador to Afghanistan, Iraq and Syria, now dean and executive professor of the George Bush School of Government and Public Service at Texas A&M University, said he was puzzled by the award, even given what he described as the “pretty checkered history” of the Nobel Prize committee’s choices.

“The O.P.C.W., wherever it goes in the chemical weapons effort in Syria, is not going to bring peace to Syria, because chemical weapons are simply not a major factor in Assad’s ability to wage war, which in my view is why he’s willing to cooperate,” Mr. Crocker said.

“Getting rid of chemical weapons anywhere is a good thing,” he said, “but to make this worthy of the Nobel Peace Prize, I just don’t get it.”