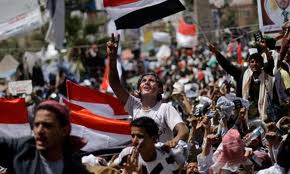 Six months after its inception, Yemen National Dialogue Conference is unraveling under the weight of its representatives’ own political inadequacies and failures, risking engulfing the impoverished nation in yet another spell of violence and bloodshed as factions are barricading themselves behind a stubborn refusal to compromise.

Although President Abd-Rabbu Mansour Hadi claimed earlier this week at a meeting of the NDC that Yemen was but days away from finalizing its new federal map, all representatives having agreed in principle that Yemen should be divided into “several regions” under a federal system. Realities on the ground have shifted over the past 48 hours from bad to worse.

“We are a few days away from reaching a just solution to the southern issue within a united and federal Yemen,” said President Hadi on Monday, adding, “Already a broad national agreement has been reached on several aspects of a settlement to the southern issue … It will not be difficult to overcome a few remaining issues.”

Yet on Wednesday the Houthis and their new political ally, al-Harak staged a sit-in at the NDC, preventing representatives from resuming their work. Faced with much chaos and confusion, Abdel Karim al-Iryani – NDC vice-president – had to suspend all negotiations.

Both the Houthis – reformed Zaidi Shiite rebel group organized under the political denomination, Ansar Allah – and al-Harak – the Southern Secessionist Movement – have as of Wednesday evening announced they would together boycott the NDC as they both felt the deep state – the remnants of the former regime – had failed to fulfill their people’s democratic aspirations, calls for social justice and reparations for former state abuses and sectarian-based repression.

In a rather dramatic fashion, Mohammed Ali Ahmed, Head of the NDC Southern Issue team and prominent Haraki leader told reporters, “It is injustice that has united us [the Houthis and the Southern Movement].”

Both factions published a joint statement on Wednesday announcing, “Our boycott is in response to the lack of consensus on the northern and southern questions … traditional forces [the former regime] have been in charge of debating and deciding on the most important national issues.”

Houthi leaders have warned that political inclusiveness is paramount should an agreement ever be reached with the government. Following decades of latent repression, political and social exclusion the Shiite group is determined to ensure that its people would never have to suffer for their religious beliefs and cultural preferences ever again.

It is important to note that while officials in Sana’a – the Yemeni capital -have been quick to slam the Houthis for their decision, warning that such betrayal would lead to severe retributions, the group has from the get go of the National Dialogue proved to be more than accommodating, having time and time again put Yemen’s interests before its own, in the spirit of unity.

If the Houthis were willing to consciously forgive decades of violence against their people, recent attacks against Shiite communities in Sa’ada and al-Jawf -northern provinces under the control of the Houthis- shattered their faith in the government’s promises that Salafis – radical Sunni group organized under al-Islah, Yemen’s most prominent Sunni political faction – would refrain from any form of persecution in Yemen highlands.

With sectarian tensions once again flaring up, the Houthis chose to withdraw from the NDC, feeling betrayed by the coalition government.

Back in Aden – former capital of South Yemen – Haraki leaders have called on their supporters to stage massive demonstrations to push forth their bid for secession.

Former South Yemen President, Ali Salem al-Baidh, a fervent advocate of secession has already called Yemen NDC a failure and a political waste of time, stressing that northerners had never truly intended righting the former regime’s wrongs, but rather sought to perpetuate their illegitimate rule over the south in order to retain its many riches.

With nowhere to go politically Yemen truly stands at a dangerous crossroads. Caught in between a rock and hard place – quite literally – the coalition government finds itself sandwiched off, with on the one hand the Houthis in the north and al-Harak in the south.

And while both factions have so far rejected calls for violence, their leaders still intent on resolving their issues with Sana’a in a peaceful manner, should officials continue to refuse the Houthis and al-Harak’s legitimate demands and calls for fair political representation to preserve the old guard’s privileges, Yemen could not only face territorial fragmentation but quite simply civil war.

The Houthis have made clear that although dedicated to peace, their fighters would not shy away from a military stand-off, should the central government decide to use military intimidation to force their leaders back to the negotiating table.

No longer a small dissident group with limited political traction, the Houthis have grown in strength since 2011. Ansar Allah has managed since its creation to attract more Yemenis to its cause because of the political alternative it offers. Unlike other political factions which have long been disconnected from the people they are meant to represent, Ansar Allah has tapped into Yemenis’ yearning for social and judicial reforms.

Standing shoulder to shoulder a-Harak and the Houthis are a political force to be reckoned with, making the central government the political minority.

With political instability running at an all-time high, security experts have warned that terror groups such as al-Qaeda would now seek to exploit the situation to their advantage through further acts of sabotage and militancy, thus putting the nation in further danger.

More troubling yet, UN Special Envoy to Yemen, Jamal Benomar who has extended its stay, hoping he would manage to broker a deal with the Houthis and al-Harak and thus return all representatives to the negotiating table to finalize Yemen’s power transfer and the drafting of the new constitution, has announced that if all should fail, the UN would put Yemen under its direct tutelage and organize its administration.

More preoccupied with the safeguard of its interests in the region, the UN, and through the UN, the GCC, the EU and the United States of America contemplate stripping Yemenis of their right to self-determination – all in the name of democracy of course – by imposing their political footprint on the impoverished nation.