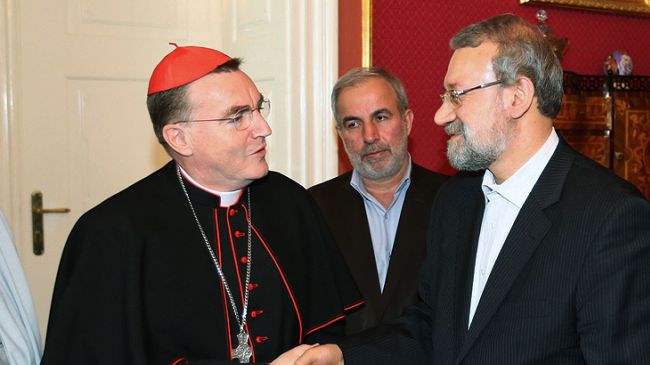 Terror will not lead to democracy in Syria: Iran

Iran Majlis Speaker Ali Larijani says supporting terrorism and supplying arms to the Takfiri militants in Syria cannot lead to the establishment of democracy in the Arab country.

During a meeting with Croatian Archbishop Josip Bozanic in Zagreb on Thursday, Larijani said the main concern regarding the situation in Syria is that some countries clandestinely provide arms to terrorist groups operating in the crisis-hit country.

“We welcome the promotion of democracy in Syria, but democracy cannot be created through terrorism and weapons of mass destruction and we have repeatedly pointed the issue out to regional countries,” said the senior Iranian official.

Foreign-backed terrorist groups in Syria have created a “huge problem” for the country, said Larijani, adding, “Many Christians, Alawites and Sunnis have been beheaded or assassinated in recent incidents in Syria.”

Syria has been gripped by deadly unrest since 2011. According to reports, the Western powers and their regional allies – especially Qatar, Saudi Arabia, and Turkey – are supporting the militants operating inside Syria.

The United Nations says more than 100,000 people have been killed and millions displaced due to the turmoil in Syria.

Elsewhere in his remarks, Larijani highlighted the rights of religious minorities under the Iranian Constitution and stressed that the Islamic Republic attaches special significance to the country’s relations with Christian states.

The Croatian archbishop, for his part, welcomed Larijani to Croatia and underlined the necessity for the expansion of interactions between Tehran and Zagreb.