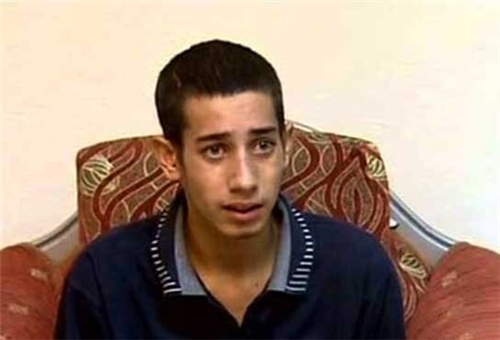 TEHRAN (FNA)- 14-year old terrorist Omran Adnan Qaddour disclosed the details of his participation in acts of killing, looting and kidnapping in addition to planting explosives and smuggling weapons.

In confession broadcast by the Syrian TV on Wednesday, terrorist Qaddour said that he was recruited by the terrorist groups as he joined gunmen for money, SANA reported.

“The armed group trained me on using arms, ” he said, adding that he alongside his brothers, who have joined the terrorist groups earlier, kidnapped a man in al-Qussour neighborhood in Hama and released him after torturing him for SYP one million, he added.

He also confessed that he participated in kidnapping 3 soldiers in the same area.

Qaddour said that he and his brother Hussam planted 2 explosive devices on Hama-Salamieh highway and detonated them during passing military vehicles.

He added that they planted a third explosive device near al-Sinaa roundabout for targeting another military vehicle.

The terrorist confessed that he smuggled weapons from al-Jaijieh neighborhood in Hama to the groves area by motorcycle.

Qaddour also attacked a military checkpoint and fired against its personnel, causing their injury.

He confessed that he robbed three houses in al-Qussour neighborhood and the grove area.