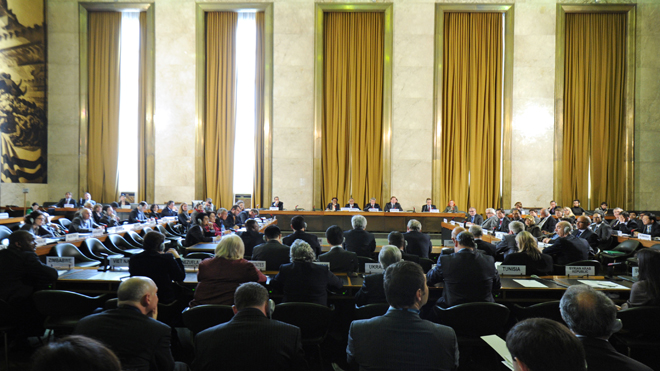 (Reuters) – Iran rejects any conditions for taking part in a long-delayed peace conference on Syria, Iranian media reported, in effect dismissing a U.S. suggestion that Tehran back a call for a transitional government in Damascus.

The United States accuses Iran of supporting the government of Syrian President Bashar al-Assad in a civil war that has run for more than two years, killed more than 100,000 people and eluded all efforts at a peaceful settlement.

The U.S. State Department said on Monday Washington would be more open to Iran taking part in a “Geneva 2” conference seeking an end to the war if Iran publicly supported a 2012 statement calling for a transitional authority to rule Syria.

But Iran rejected any conditions being placed on it to participate in diplomatic efforts on Syria, Foreign Ministry spokeswoman Marzieh Afkham said on Tuesday evening.

“If our participation is in the interest of achieving a solution, it will be unacceptable to set conditions for inviting the Islamic Republic of Iran, and we accept no conditions,” Afkham said, according to the state-run Press TV.

A June 2012 “Geneva Communique” sought to chart a path to a diplomatic resolution of the conflict, and was agreed to by major powers such as the United States and Russia, Gulf states, and Syria’s neighbors Iraq and Turkey – but not Iran, which was not invited to those talks.

The agreement called for a transitional governing authority but left open the question of whether Assad must leave power.

The agreement said such a transitional government must be chosen by the Damascus government and the opposition by mutual consent, which the United States says in effect rules out Assad staying in power.

On Monday, a State Department spokeswoman suggested the United States might be better disposed to Iran’s taking part in a Geneva 2 conference if Tehran were to embrace the original Geneva Communique.

Afkham said excluding Iran from the talks would “deprive the negotiations of Tehran’s constructive role.”

The United States and Iran have recently started something of a diplomatic rapprochement, with U.S. President Barack Obama speaking by telephone with Iranian President Hassan Rouhani on September 27, the highest level contact since 1979.

The two sides, along with Britain, China, France, Germany and Russia, are sending delegations to Geneva for separate talks on October 15-16 to try to address a dispute over Iran’s nuclear program.

The United States and its allies suspect Iran is using its civilian nuclear program as a cover to develop atomic weapons. Iran denies this, saying its program is for peaceful purposes.