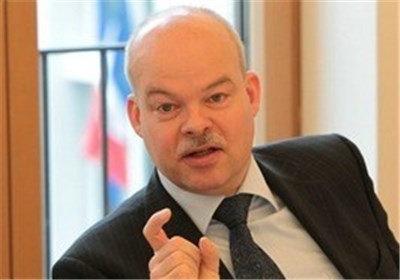 TEHRAN (Tasnim) – A German foreign ministry official who is visiting Tehran to explore ways of expanding bilateral ties described Iran as an important market for German companies and a valuable asset for both countries.

In a meeting between Iran’s Deputy Foreign Minister for Europe and American Affairs Majid Takht Ravanchi and Head of Africa, Asia-Pacific and Latin America and the Middle East Division in the German Foreign Ministry Clemens von Goetze, the two diplomats discussed the status of bilateral relations in political, economic, cultural and international fields.

The Iranian official expressed Tehran’s preparedness to facilitate trade exchanges with the European country, especially in light of German companies’ willingness to increase their activities in Iran.

The German diplomat welcomed the positive view of Iran’s high ranking officials and described the Iranian market as important for German companies and a valuable asset for both countries.

He also hailed the meeting between German Foreign Minister Guido Westerwelle and Iranian President Hassan Rouhani on the sidelines of the 68th annual session of the UN General Assembly in New York as positive and effective, expressing hope that bilateral relations will further expand in the future.

In relevant remarks on September 21, Iranian President Hassan Rouhani had expressed hope that relations between the Islamic Republic of Iran and Germany would further expand.

“I hope these historical relations will further develop and strengthen in all fields through better cooperation between the two governments,” Rouhani said at the time.

He also hoped that the two countries would work towards reviving relations in areas such as industry and trade which he said have suffered unwanted restrictions.