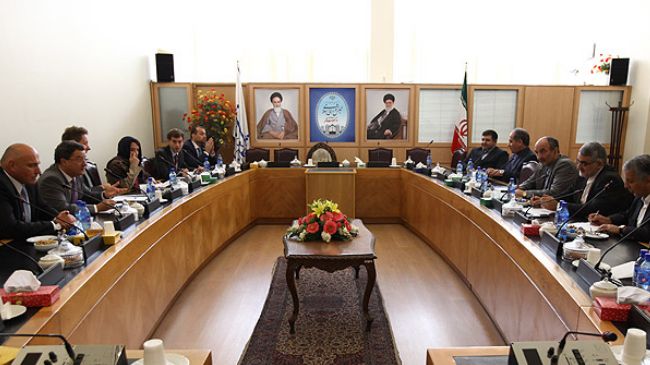 An Iranian lawmaker has stressed the importance of the establishment of a Middle East region free of nuclear weapons, calling for the denuclearization of Israel.

“The Islamic Republic of Iran’s policy is [based on] efforts to materialize the idea of a Middle East without nuclear weapons and [to achieve this goal] the Zionist regime [of Israel] must be denuclearized,” Chairman of Iran Majlis National Security and Foreign Policy Committee Alaeddin Boroujerdi said in a meeting with the visiting Secretary of State at the Swiss Foreign Ministry Yves Rossier in Tehran on Tuesday.

He reaffirmed the peaceful nature of Iran nuclear energy program and warned against destructive consequences of nuclear weapons.

The top Iranian legislator stated that Iran and Switzerland maintain cordial relations based on mutual respect and share stances on regional and international issues.

Boroujerdi lauded Syria’s decision to join the Chemical Weapons Convention (CWC) and stated that efforts by certain international powers and regional countries to arm terrorist groups and support extremist movements in Syria are equal to spreading terrorism and insecurity in the region.

“The crisis in Syria can be resolved only through negotiations and dialog between Syrian groups and government,” the Iranian legislator added.

Syria agreed to the deal, thus averting a US military strike on the Arab nation over a chemical attack in Damascus that Washington had blamed on the Syrian government. Damascus strongly rejected the allegation, saying the attack had been carried out by the foreign-backed militants to draw in military intervention.

The Swiss official, for his part, stressed the necessity to fight against terrorism and said his country believes that the Geneva 2 talks can play a considerable role in resolving the crisis in Syria.

On Monday, Russian Foreign Minister Sergey Lavrov said Moscow and Washington have agreed to push for holding the planned Geneva II conference on the Syria crisis in mid-November.

Syrian President Bashar al-Assad has expressed readiness to take part in the Geneva II conference, stressing that he will not negotiate with terrorists.

Syria’s foreign-backed opposition coalition remains divided over taking part in the second round of Geneva talks. They have repeatedly expressed reluctance to take part in the conference unless Assad steps down.