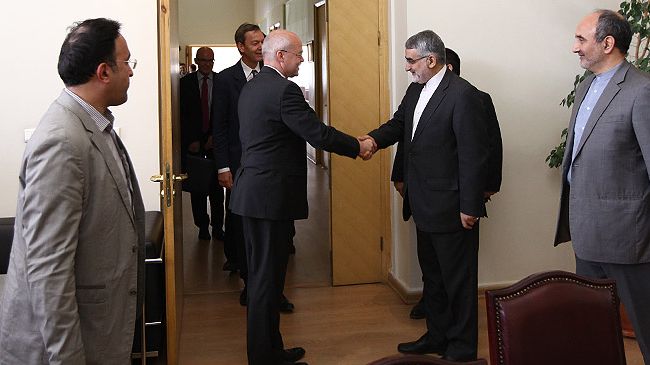 Boroujerdi made the remarks in a meeting with Head of Africa, Asia/Pacific and Latin America and the Middle East Division in the German Foreign Ministry Clemens von Goetze in Tehran on Tuesday.

“The Islamic Republic of Iran welcomes expansion of relations with the European countries and hopes that their policy of sanctions will change as quickly as possible,” Boroujerdi said.

He noted that the illegal sanctions imposed on Tehran have deprived German companies of economic and trade opportunities in Iran.

“The Iranian nation and government, thanks to their capabilities and vast human potentials, have managed to meet their needs,” he said, adding that the European and American companies have suffered losses due to the sanctions.

Goetze, for his part, said Iran’s nuclear issue has eclipsed relations between Iran and Germany.

The German government is deeply interested in broadening economic, political and cultural ties with Iran, and supports Iran’s right to acquire peaceful nuclear energy, he said.

The German official further noted that German companies are keen to win footholds in the Iranian market.