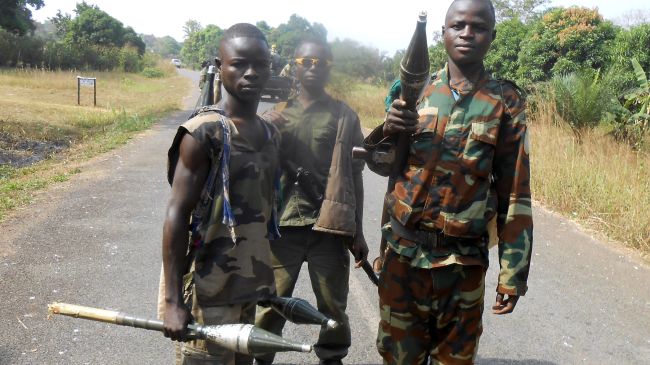 At least 30 people have been killed and many others injured in the Central African Republic (CAR) in clashes between former rebels of the Seleka coalition and local groups, a security source says.

Fighting continued early on Tuesday in the village of Garga, 200 kilometers (120 miles) northwest of the capital Bangui, the source close to the military high command told AFP in the capital.

“Fierce fighting has claimed at least 30 lives… but the clashes were still going on as of mid-morning,” said the source, adding that the self-defense groups began attacking the village on Monday, killing three people and injuring a dozen.

It was not possible to corroborate the figure independently as conflicting reports were released about the incident.

The source added that ex-Seleka rebels, who distributed weapons to the local population, fought back, which left the town “emptied of its residents” as they took refuge in the bush.

The Seleka rebels, who launched an offensive against the CAR government in December 2012 and finally ousted then President Francois Bozizé in March, have been accused of killing, looting, and raping across the country.

On September 13, CAR President Michel Djotodia dissolved the rebel group, which had brought him to power.

There are many mineral resources, including gold and diamond, in the Central African Republic. However, the country is extremely poor and has faced a series of rebellions and coups since it gained independence in 1960.