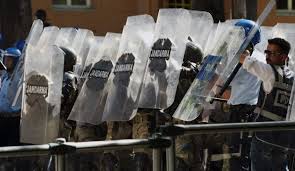 Police in southeastern Turkey have clashed with Kurdish protesters demonstrating against a recent government reform package.

Protesters took to the streets in the city of Cizre on Monday to denounce the reform package. The protest, however, turned violent around nightfall.

Militants from the Kurdistan Workers’ Party (PKK) and some Turkish political figures have rejected the reforms proposed by the government of Prime Minister Recep Tayyip Erdogan, saying the package is not meant to end the decades-long conflict.

Under the reform package, Kurdish-language education will be permitted in private schools and electoral candidates will be allowed to campaign in Kurdish.

The reforms also aim to ease rules that prevent pro-Kurdish and other smaller parties from entering the parliament.

In addition, towns can revert to their previous Kurdish names, and a quirky ban on the use of three letters of the Kurdish alphabet that do not exist in Turkish will be lifted.

On September 30, Gulten Kisanak of the pro-Kurdish Peace and Democracy Party, which has 29 seats in parliament, said the reforms “didn’t address any of their expectations.”

The jailed PKK leader, Abdullah Ocalan, declared a historic ceasefire in March following months of negotiations with the Turkish government.

In return, the PKK asked for reforms to the penal code, electoral laws and the right to education in the Kurdish language and a degree of regional autonomy.

In September, the group, however, announced they were planning to suspend the ceasefire, accusing Ankara of failing to deliver the promised reforms.

The PKK has been fighting for an autonomous Kurdish region in southeastern Turkey since the 1980s. The conflict has left tens of thousands of people dead.