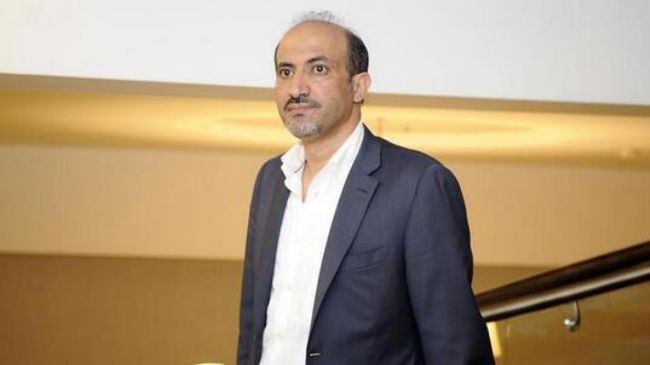 The head of the Syrian National Coalition Monday listed conditions that need to be “guaranteed” in order for the main opposition group to participate in the proposed Geneva II conference aimed at solving the 30-month Syrian conflict.

“We do not reject participation in Geneva II but we request guarantees for its success. And if we receive these guarantees we will show them to the military leaders,” Ahmed al-Jarba told reporters.

Jarba, who described Iran as an “enemy” and “occupier” of Syrian land, said the Islamic republic must not participate as “mediator” in the conference.

Iran and the Lebanese Shiite movement, Hezbollah, have fought alongside the Syrian regime of Bashar al-Assad against rebels.

“We ask Hezbollah to leave Syria,” he added.

The opposition leader said that there will be “no dialogue with criminal Assad regime,” re-iterating his group’s redundant appeal for embattled President Assad to cede power for any political solution to be negotiated.

“Nationalist dialogue is only with nationalists,” he repeated.

Asked about Hezbollah’s presence in Syria, Jarba said the Lebanese group was “still fighting in our beloved Syria.”

He said al-Waer neighborhood in Homs province was recently shelled by Syrian troops with the participation of Hezbollah fighters.

“I do not know how Hezbollah calls itself an opposition party aiming to liberate Haifa and Jerusalem [from Israel] starting from Qusayr [Homs city] and Waer.”

On Friday, The Times reported that the Lebanese guerilla group has begun withdrawing some of its fighters after pressure from the government in Beirut.

Meanwhile, on Sunday, the U.N. envoy to Syria Lakhdar Brahimi urged all parties of the Syrian conflict to engage in peace talks “without pre-conditions,” adding that he hoped negotiations could take place in Geneva by mid-November.

The proposed conference would aim to decide how to implement a declaration agreed by the major powers in Geneva in June 2012. The declaration stated that there should be a transitional government in Syria.

Both the United States and Russia have urged the United Nations to set a date for the peace conference in the second week of November, U.S. Secretary of State John Kerry said on Monday.