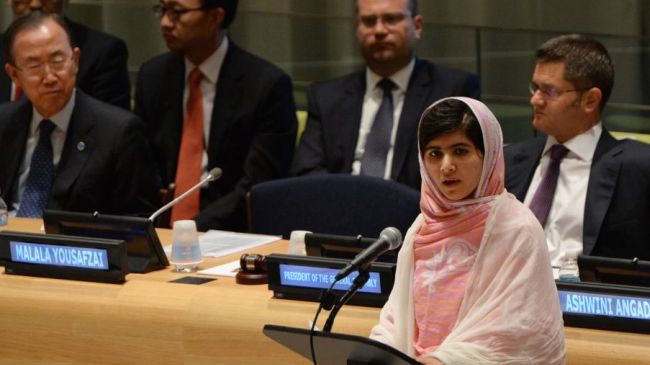 The Pakistani Taliban have vowed to attack human rights activist, Malala Yousafzai, again if they are offered the chance.

“She is not a brave girl and has no courage. We will target her again and attack whenever we have a chance,” Shahidullah Shahid, spokesman for Tehrik-i-Taliban Pakistan (TTP) said.

On October 9, 2012, Malala was shot by TTP militants in the town of Mingora for speaking out against the fanatics and promoting education for girls and women in her home region, the Swat Valley of Khyber Pakhtunkhwa Province.

A day after she was shot, a bullet which hit Malala’s skull was removed by surgeons in Peshawar. She was later transferred to a military hospital in Rawalpindi for more treatment.

On October 15, Malala was flown to Britain for specialist care at the Queen Elizabeth Hospital in Birmingham after Pakistani doctors said she needed treatment for a damaged skull and “intensive neuro-rehabilitation.”

The 16-year-old Pakistani female activist has become a global ambassador for the right of all children to go to school.

She is now among the favorites for the Nobel Peace Prize, which will be awarded on Friday.

Malala has rejected the threats against her life in an interview with the BBC and repeated her desire to go back to Pakistan from Britain.