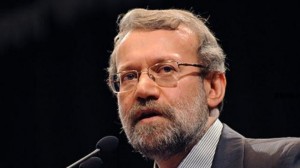 Iran Majlis Speaker Ali Larijani has underlined the importance of the completion of Iran-Pakistan (IP) gas pipeline project as a prelude to promotion of Tehran-Islamabad relations.

“The Peace [gas] Pipeline is among the important projects which will lead to the expansion of trade cooperation [between] the two countries,” Larijani said in a Tuesday meeting with Speaker of Pakistan’s National Assembly Sardar Ayaz Sadiq on the sidelines of the Inter-Parliamentary Union Assembly in Geneva.

Larijani also underscored the need for a series of negotiations between Iran and Pakistan about regional security and said, “The issue of terrorism is among the key regional issues, which necessitates joint cooperation between officials of the two countries to resolve it.”

He pointed to the US objection to implementation of the IP pipeline, adding that Pakistan vigorously pursues this project.

The United States has long been threatening Pakistan with economic sanctions if Islamabad goes ahead with the gas pipeline project. But the Pakistani government has no plans to reverse the decision.

The Pakistani National Assembly speaker described the US as the main culprit in the expansion of terrorist activities in the region, and expressed the Pakistani parliament’s preparedness to fully cooperate with Iran to counter this phenomenon.