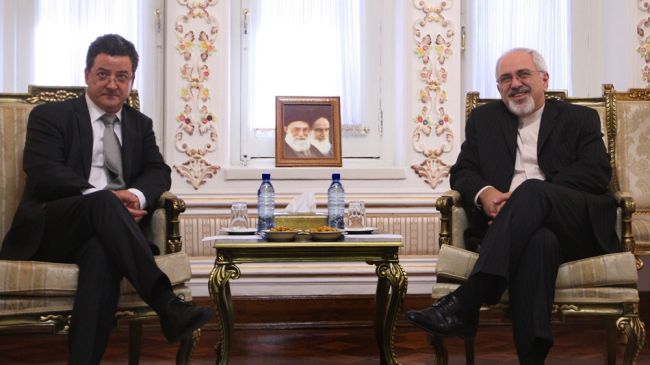 Iran Foreign Minister Mohammad Javad Zarif has warned against the repetition of previous Western mistakes, saying the scheduled talks between Tehran and the six major world powers in Geneva will be a “unique chance.”

In a Monday meeting with the Secretary of State at the Swiss Foreign Ministry, Yves Rossier, Zarif said the Geneva talks would be a great opportunity for a new approach to Iran-West interaction while observing mutual interests and taking into consideration mutual concerns.

Iran and the five permanent members of the UN Security Council — Russia, China, France, Britain, and the US — plus Germany will hold a fresh round of talks in Geneva on October 15-16.

Foreign ministers of Iran and the six countries held talks at the United Nations headquarters in New York on late September 26, with the main focus being on Tehran’s nuclear energy program.

Zarif said that the approach of threat and sanctions have failed to serve the interests of the other side over the past years.

“The continuation of this approach will be the repetition of previous mistakes which could not prevent the peaceful course of Iran’s nuclear energy program,” the Iranian minister added.

He once again reaffirmed Iran’s readiness to allay “logical” concerns about the nuclear issue and emphasized that the Islamic Republic has an “absolute and principled” right to use peaceful nuclear technology including enrichment inside its own territory.

Iran categorically rejects the allegation, arguing that as a committed signatory to the Non-Proliferation Treaty (NPT) and a member of the International Atomic Energy Agency (IAEA), it has the right to use nuclear technology for peaceful purposes.

Zarif further called for the expansion of Tehran-Bern ties at bilateral and multilateral levels.

“The Islamic Republic of Iran and Switzerland have many grounds and capacities to further expand relations in political, economic and trade fields,” the top Iranian diplomat stated.

The Swiss official, for his part, stressed the importance of strengthening cooperation with Iran.

Rossier said Iran plays an “influential and important” role in establishing stability and security in the region and called on Tehran to help resolve regional problems.

He expressed hoped constructive negotiations between Iran and the six major powers in Geneva would result in positive outcomes in line with the interests of both sides.