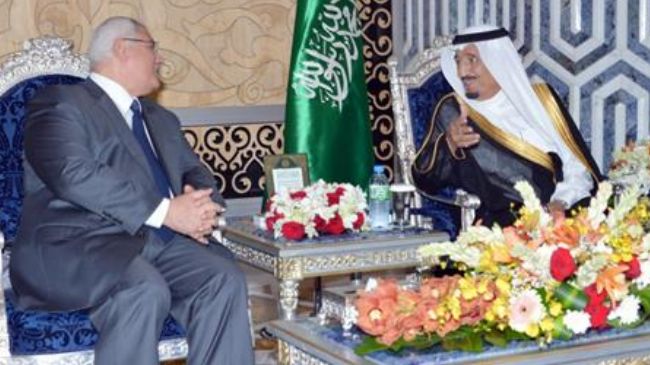 Egypt’s army-backed interim President Adly Mansour has arrived in Saudi Arabia to thank the kingdom, which was the first country to embrace the July ouster of former president, Mohamed Morsi, by the Egyptian military.

Mansour arrived in the Red Sea city of Jeddah on Monday on his first official trip abroad since he replaced Morsi and was received by Saudi Arabia’s Crown Prince Salman bin Abdulaziz.

The Egyptian interim president told the Saudi daily Asharq al-Awsat that “visiting the kingdom was a must” for him as he had to thank King Abdullah personally “on his supportive stances” towards Egypt.

Mansour also hailed Riyadh backing for his government at a “time when many Arab states took a reserved stance or adopted the opposing view naming what happened a ‘military coup.’”

Mansour is due to meet with King Abdullah later on Monday. The Saudi monarch was the first foreign head of state to congratulate Egypt’s interim president after his appointment in July.

Riyadh has also pledged to pay an aid package of USD 5 billion to Cairo.

On July 3, Egyptian Army removed Morsi from office in what was widely described as a coup. The military also suspended the constitution and declared the head of the Supreme Constitutional Court, Adly Mansour, as the interim president of Egypt.

The government of Mansour has launched a violent crackdown on Morsi supporters and arrested more than 2,000 Brotherhood members, including the party’s leader, Mohamed Badie, who was detained on August 20.