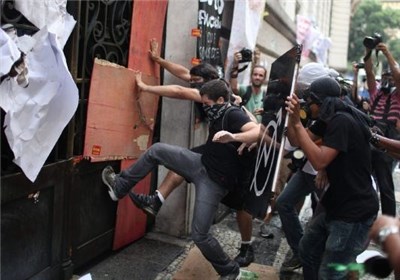 TEHRAN (Tasnim) – Clashes broke out in Rio de Janeiroas striking teachers and their supporters took to the streets to protest against salary levels and a police crackdown on earlier demonstrations.

Organisers rallied thousands in the centre of the Brazilian city on Monday night to demonstrate for the teachers, who are demanding pay increases and an overhaul of the education system. Protesters also spoke out against what many considered to be an excessive use of police force on demonstrating teachers a week ago.

The demonstrators have already rejected the government’s proposals of a 15 percent pay rise.

The protest began peacefully, with demonstrators occupying one of Rio’s major downtown boulevards. According to police, about 10,000 protesters filled the streets. The teachers’ union, however, put that figure at closer to 50,000 people.

The scene turned violent after the marchers reached city hall.

A small group of protesters threw fireworks, grenades, tear gas and set fire to a barricade of rubbish near the public building, where legislation was recently passed changing public teacher’s pay and working hours.

The police responded with tear gas to disperse the crowds.

Al Jazeera, reporting from the site of the clashes in Rio, said that the teachers’ protest was part of a wider anti-government movement, which began in June.