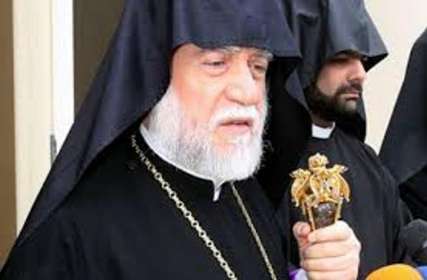 Religious leader: US nearing to Tehran shows importance of Iran

Beirut, Oct 5, IRNA – Armenian Church (Catholicosate of Cilicia) Leader His Holiness Aram I, by referring to recent visit of Iran’s President Hassan Rouhani to New York, said that the US nearing to Iran indicates important position of the Islamic Republic of Iran.

Catholicos Aram I made the remarks in a meeting with Iran’s Ambassador to Lebanon Ghazanfar Roknabadi here on Saturday.

Referring to the telephone conversation between President Rohani and President Obama, the Armenian religious leader said it was a very important development in international arena that can be effective in solving problems of the region, including Syria and Lebanon.

He continued that world Armenians, including the US Armenians, agree with this new development and are pleased.

Ambassador Roknabadi, for his part, explained regional developments and the latest developments in Iran’s nuclear dossier and talks with Group 5+1 in New York in foreign ministers level, adding that Iran, without any withdrawal from its principles, is taking steps so that its demands are met.