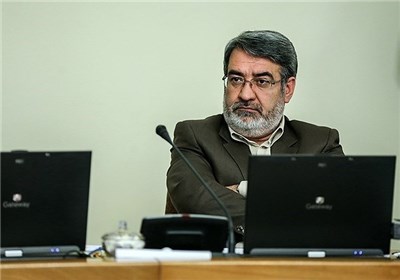 TEHRAN (Tasnim) – The Iranian interior minister and the visiting Algerian police chief in a meeting on Saturday exchanged ideas on joint activities in international campaign against drug trafficking.

Iran shoulders the heavy burden of campaign against the transit of narcotic drugs from Afghanistan to various parts of the world alone, complained Iran’s Interior Minister and Head of country’s Anti-Narcotic Drugs Campaign Headquarters Abdol-Reza Rahmani Fazli, calling on other countries to pitch in and participate in the fight against drugs.

In his meeting with Algerian Police Chief Major General Abdul-Qani al-Hamid, the Iranian minister called for further expansion of bilateral cooperation with Algeria in operational fields, adding, “ In foreign policy, the new Iranian government is determined to expand its activities and create a better atmosphere, and gives top priority to its relation with the Islamic countries.”

The Iranian interior minister evaluated cooperation between the two countries’ law enforcement forces as good, emphasizing, “Training the forces involved in the operations against narcotic drugs is among the fields in need of serious attention.”

The Algerian police chief said for his part that the travel of his delegation to Tehran is proof that Algiers is determined to improve its relations with Tehran in all areas of interest.

Major General al-Hamid referred to the shared threats and problems with which both countries are faced, saying, “Our two countries’ cooperation is mainly centered around exchange of information and expertise, and we wish to expand the dimensions of this cooperation.”

On August 4, Iranian President Hassan Rohani said the Islamic Republic was completely ready to expand and deepen mutual relations with Algeria in economic, cultural and political fields. He made the remarks in a meeting with Algerian Parliament Speaker Abdul Qadir bin Saleh.

Bilateral economic cooperation between Algeria and Iran has increased since a resumption of diplomatic relations between the two countries in September 2000, after they were severed in 1993.