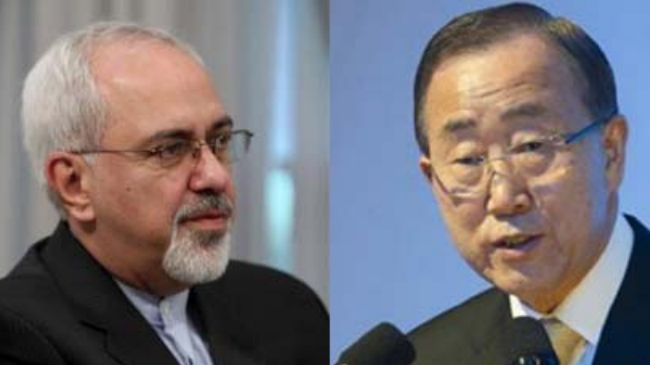 “It is necessary that the United Nations play a central role in Iran’s nuclear issue, and we shouldn’t allow improper political comments and moves to disrupt this process,” Zarif told UN Secretary General Ban Ki-moon during their third meeting on the sidelines of the 68th session of the United Nations General Assembly.

Iran categorically rejects the allegation, stressing that as a committed member of the International Atomic Energy Agency (IAEA) and a signatory to the Non-Proliferation Treaty (NPT), it is entitled to develop nuclear technology for peaceful purposes.

The Iranian foreign minister further pointed to Tehran’s efforts to help work out a peaceful settlement to the crisis in Syria, saying Tehran is prepared to continue to offer any cooperation aimed at finding a political solution to the conflict in the Arab state.

Zarif also warned of the dangers of chemical weapons in the hands of extremist groups, adding, collective and international efforts should focus on the chemical disarmament of all sides in Syria.

The US had threatened to take military action against Syria over an unsubstantiated claim that the Syrian government had been behind a deadly chemical attack on militant positions near Damascus on August 21.

Syria categorically rejected the allegation, saying the “false-flag operation” was carried out by the foreign-backed militants to draw in military intervention.

On September 14, Russia and the United States agreed on a deal under which Syria must account for its chemical weapons stockpiles within a week and see them eliminated by the middle of 2014. Syria has agreed to the deal.

The UN chief, for his part, hailed the Iranian delegation’s presence in the General Assembly’s session, saying Iran can play a vital role in defusing the crisis in Syria.

The UN has always announced that Iran should participate in any negotiations on the Syrian crisis, Ban added.

He also stated that the UN has called on both Iran and the five permanent members of the UN Security Council — Russia, China, Britain, France and the US — plus Germany to find an immediate political solution to the dispute over Tehran’s nuclear energy program.

Highlighting Tehran’s pivotal role in different regional issues, Ban urged Iran and the UN to continue their contacts and cooperation.