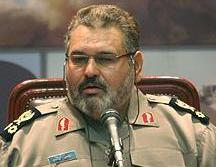 “Netanyahu registered his name as a warmonger in UN records and could not achieve anything except more threats for the Zionists,” Major General Hassan Firouzabadi said on Wednesday.

Referring to the infamous ‘all option on the table’ phrase used by US President Barack Obama against Iran — a thinly veiled reference to military action —  Firouzabadi said, “Today the military option is ineffective, outdated, and rusty, and rests on a broken, shaky table.”

Angered by a thaw in tortous relations between Iran and the US following a telephone conversation between presidents of the two country on Friday, and frustrated by Iran’s new policy to improve its relations with the West, Israeli took the UN podium to describe the Iranian president as “a wolf in sheep’s clothing”, and accuse the country of seeking to obtain a nuclear weapon.

Iran is a signatory to the nuclear Non-Proliferation Treaty and has all its nuclear activities under the full supervision of the International Atomic Energy Agency.

“Our principles are that we have left the doors of nuclear sites open to the (International Atomic Energy) agency, and they can oversee,” Iran’s President said on Wednesday.

“Iran has an inalienable right to peaceful nuclear energy and is fully committed to its nonproliferation obligations,” said Khodadad Seifi, adding that Israel, unlike Iran, has not signed the nonproliferation treaty. “Israel is the only one in the region that possesses all types of weapons of mass destruction but is not party to any of the treaties banning them.”

“There is no single acceptable reason to possess nuclear weapons, but there are many agreeable reasons to abolish them all,” he said.

Israel is believed to possess anywhere from 75 to as many as 400 nuclear weapons, but has always avoided confirming or denying whether it has nuclear weapons.

Iran denies accusations by Israel, the US and some of their western allies that it is after obtaining a nuclear weapons capability, saying it wants nuclear energy for purely peaceful purposes and that it is on religious, ethical and practical grounds opposed to such weapons.