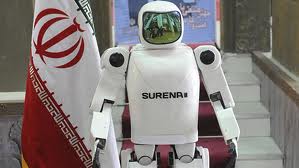 TEHRAN (ISNA)- Iranian researchers at Tehran University are building the third generation of Humanoid robot known as ‘Sorena 3’ with advanced capabilities which will be unveiled in less than two years.

The robot can climb steps and inclined surface, turn point and speak.

The Iranian characteristics are to be included in the region. The expert technical designers have gathered to design it in a beautiful appearance.

The national plan of applied robotic development inspired by the nature started in Iran in January 201h.

‘Sorena 1’ and ‘Sorena 2’, the first humanoid robots were unveiled respectively in 2009 and 2011. The third one under construction would be unveiled by the next two years.