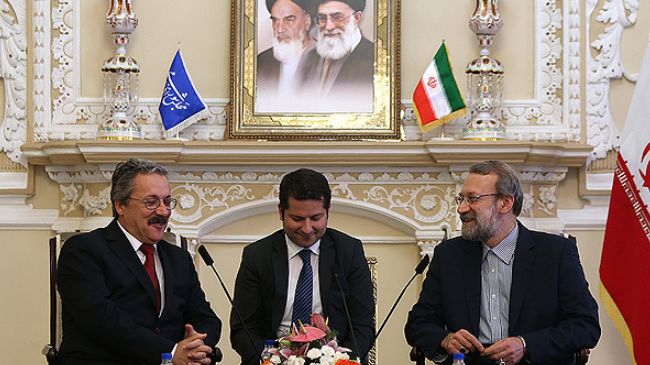 Era of militarism over: Iran Speaker

Iran’s Majlis Speaker Ali Larijani says the era of militarism has reached its end, stressing the importance of political approaches and diplomacy to solve the ongoing woes in the Middle East.

Larijani said on Sunday that the only way to settle differences and resolve problems in regional countries is through “political approach[es] and the use of diplomacy.”

He made the remarks in a meeting with Secretary General of Parliamentary Union of the Organization of Islamic Cooperation (PUIC) member states Mahmud Erol Kilic in Tehran.

Kilic, for his part, said the union has been established with the purpose of strengthening unity and solidarity among Muslim countries and lauded the constant Majlis support for the body.

Larijani and Kilic exchanged views on the leading developments in the Muslim world.

The Parliamentary Union of the OIC member states is consisted of the parliaments of the Organization of the Islamic Cooperation (OIC) member states. It was founded in Iran on 17 June 1999, with its head office situated in Tehran.