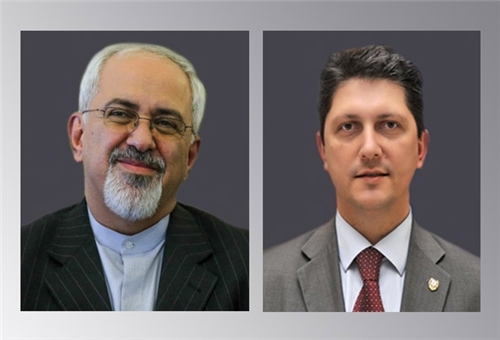 TEHRAN (FNA)- Iranian Foreign Minister Mohammad Javad Zarif and his Romanian counterpart Titus Corlatean hailed the existing bilateral relations between Tehran and Bucharest, and called for the further expansion of their countries’ mutual cooperation in all fields.

In a meeting held on the sidelines of the 68th UN General Assembly Session in New York on Saturday, the two top diplomats discussed new ways for bolstering the bilateral relations between the two friendly states in all fields, including cultural interactions.

Zarif and Corlateanalso exchanged views on the latest developments in the region and the world.

The Romanian foreign minister, for his part, welcomed resumption of the talks bewteen Iran and the six world powers, describing the negotiations as important.

Zahedi, for his part, emphasized the need to augment economic and commercial cooperation between Iran and the European Union member states in light of abundant capacities in this respect.

He highlighted significance of cementing and promoting political, economic, cultural and parliamentary relations and said that parliamentary friendship groups would play a determining role to develop the two-way friendly ties.

Romania is a country located at the intersection of Central and Southeastern Europe, bordering on the Black Sea. Romania shares a border with Hungary and Serbia to the West, Ukraine and Moldova to the Northeast and East, and Bulgaria to the South. At 238,400 square kilometers (92,000 sq mi), Romania is the ninth largest country of the European Union by area, and has the seventh largest population of the European Union with over 19 million people. Its capital and largest city is Bucharest, the tenth largest city in the EU, with a population of around two million.