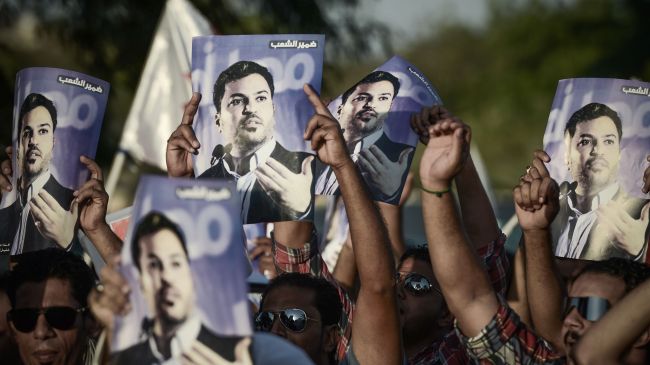 Thousands of Bahrainis rally against arrest of former MP

Bahraini protesters hold up portraits of detained former opposition MP Khalil Marzooq during an anti-regime demonstration in the village of Jannusan on September 27, 2013.

Thousands of Bahrainis have rallied near the capital, Manama, to express their anger over the arrest of a top opposition figure.

More than 10,000 Bahrainis marched in the village of Jannusan, west of Manama, on Friday to demand the release of Khalil al-Marzooq, a former deputy speaker of parliament.

Peaceful demonstrators waved Bahraini flags and chanted “Revolution until victory” and “We will not forget the martyrs”. There were no reports of violence. The rally was organized by the opposition.

Marzooq, who is the secretary general of Bahrain’s main opposition bloc al-Wefaq, was arrested on September 17 on charges of “inciting and advocating terrorism”.

Also on Friday, Bahraini forces used tear gas to disperse anti-regime protesters who tried to approach the site of the iconic Pearl Square in the capital, the epicentre of Bahrain’s revolution.

Bahraini forces also clashed with anti-regime demonstrators in the village of Shaharkhan.

On Thursday, several protesters were injured after regime forces fired tear gas and live rounds at demonstrators in Manama and nearby villages. The protesters were chanting slogans demanding the release of political prisoners and the fall of the ruling Al Khalifa family.

Bahrainis have been staging demonstrations since mid-February 2011, demanding political reforms and a constitutional monarchy, a demand that later changed to an outright call for the ouster of the ruling Al Khalifa family following its brutal crackdown on popular protests.

Scores have been killed, many of them under torture while in custody, and thousands more detained since the popular uprising in Bahrain began.

Protesters say they will continue holding anti-regime demonstrations until their demand for the establishment of a democratically-elected government and an end to rights violations are met.