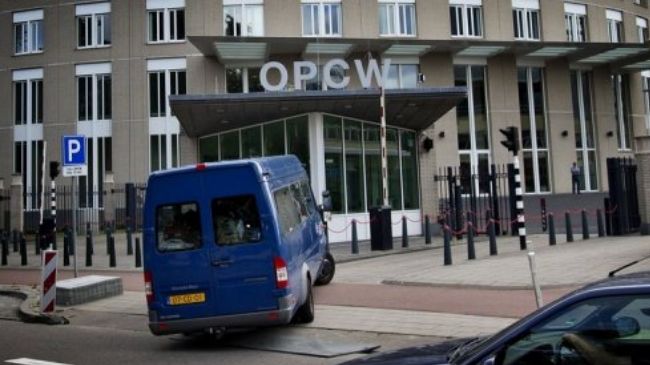 A draft resolution on Syria, agreed by Russia and the US, says the UN team of chemical weapons experts must start inspection of the Syria’s chemical stockpile by Tuesday.

On Friday, fresh details appeared about the draft resolution which is to be discussed by the Organization for the Prohibition of Chemical Weapons (OPCW) later on Friday.

According to the resolution, the Hague-based OPCW “shall as soon as possible and in any case not later than October 1 initiate inspections in the Syrian Arab Republic pursuant to this decision.”

The draft further suggests any matters related to Syria’s chemical stockpile could be resolved through “consultations and cooperation.”

The proposed resolution also says Syria’s entire chemical weapons facilities should be inspected within 30 days after the document is adopted, calling on the Syrian government to provide “immediate and unfettered right to inspect any and all sites” in the country.

The OPCW meeting comes after the United States and Russia agreed a draft UN Security Council resolution on Syria’s chemical weapons on Thursday. Russian Foreign Minister Sergei Lavrov said the proposed draft “does not envision any actions based on Chapter 7 of the UN Charter,” which authorizes military action to restore peace and security.

UN diplomats have said the UN Security Council will vote on the draft as early as Friday evening if it is approved by the OPCW.

On September 14, the United States and Russia reached an agreement in Geneva on a framework that will see the elimination of Syria’s chemical weapons by mid-2014. The deal was reached after Russia offered Syria to put its chemical weapons arsenal under international control and Damascus accepted the proposal.

Syrian President Bashar al-Assad has also said his government is committed to the Russia-US agreement.

If the draft is approved, the resolution would be the first one passed by the Council on Syria since the outbreak of the foreign-sponsored crisis in the Arab country in March 2011.