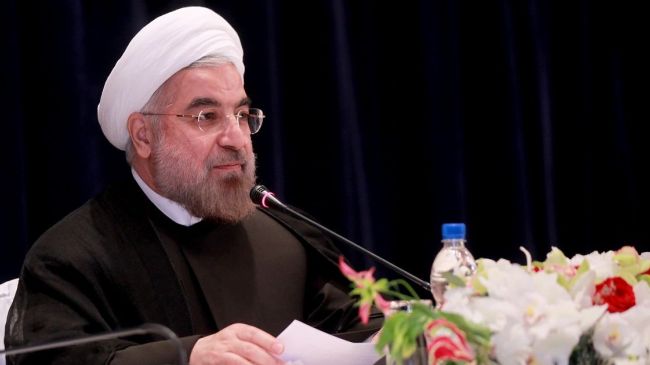 Iranian President Hassan Rouhani speaks at a press conference after the Non-Aligned Movement (NAM) Ministerial Meeting on Cooperation for the Rule of Law at the International Level in New York on September 27, 2013.

Speaking at a Friday press conference in New York after the Non-Aligned Movement (NAM) Ministerial Meeting on Cooperation for the Rule of Law at the International Level, Rouhani stated that he had held discussions with representatives from Iran’s neighboring countries about mutual trust, the expansion of economic, cultural and tourism ties as well as the resolution of existing differences on the sidelines of the 68th annual session of the UN General Assembly.

He also pointed to the tourism ties that Iran has with Saudi Arabia, Iraq, Bahrain, and Oman.

“Such relations with Saudi Arabia and Iraq are at a high level, and one of the objectives of the current (Iranian) administration is to forge and maintain friendly ties with neighbors,” Rouhani said.

The Iranian president further noted that meetings have also been arranged with a number of heads of state aimed at improving Iran’s ties with neighboring countries.

On August 5, Rouhani said that the Islamic Republic of Iran has always favored the expansion of ties with all countries of the world, particularly friendly and neighboring states.

He made the remarks in a meeting with National Assembly of Azerbaijan Speaker Ogtay Asadov in Tehran. The Iranian president said cooperation between Tehran and Baku can help enhance and consolidate regional ties.

Asadov, for his part, described the Islamic Republic of Iran as an important country in the Middle East and said Baku favors further expansion of diplomatic relations and cooperation with Tehran in diverse areas.