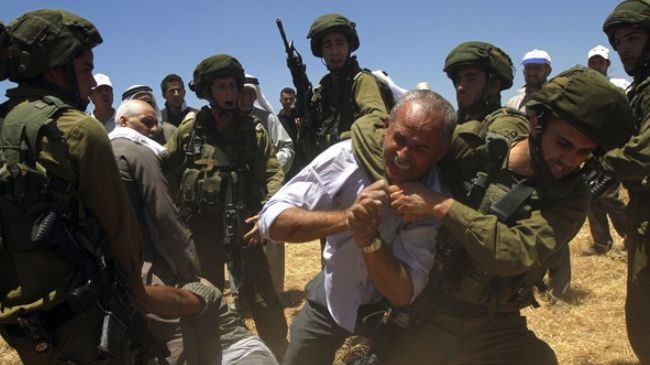 Israeli forces have clashed with Palestinian protesters in the occupied East al-Quds (Jerusalem) on the eve of the 13th anniversary of the Palestinians’ second Intifada.

Clashes broke out on Friday after Israeli troops attacked a group of Palestinians in the Old City, who were protesting against an increase in Jewish visits to the al-Aqsa Mosque compound.

At least nine Palestinians were arrested.

Similar protests against the entry by Jewish groups under police escort to the al-Aqsa Mosque compound were also held in the West Bank cities of Nablus and al-Khalil (Hebron).

Meanwhile, thousands of Palestinians have rallied in the Gaza Strip to demand an end to Jewish visits to al-Aqsa Mosque.

Acting Palestinian Authority Chief Mahmoud Abbas made a public appeal for a halt to the al-Aqsa visits during a speech at the United Nations on Thursday.

“There must be an end to the near-daily attacks on the religious sites in Occupied al-Quds, at the forefront of which is al-Aqsa Mosque, where the continuation of such attacks will have dire consequences,” Abbas said.

The second Palestinian intifada (Palestinian uprising against Israel) broke out on September 28, 2000, after a visit by then Israeli opposition leader, Ariel Sharon, to the al-Aqsa Mosque compound.

Some 300 Palestinians were killed by Israeli troops during the five-year Intifada.

The al-Aqsa compound is a flashpoint because of its significance to both Muslims and Jews. The compound, known to Jews as the Temple Mount, is the holiest site in Judaism. It is Islam’s third-holiest site after Mecca and Medina in Saudi Arabia.

Jews are not allowed to pray inside the compound.