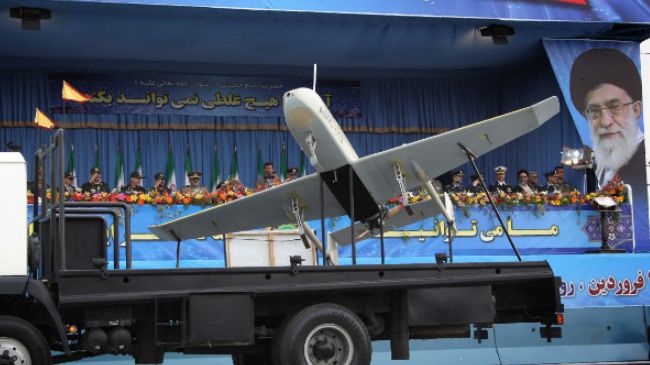 The Islamic Republic of Iran has launched the mass-production of the indigenously developed unmanned aerial vehicle (UAV) Shahed 129, which was unveiled last year.

The technology to design and develop these types of drones had been in US control, but Iran managed to break the monopoly and develop the know-how to build such aircraft, announced the Public Relations Office of the Islamic Revolution Guards Corps (IRGC).

The Shahed (Witness) 129 drone is a combat UAV capable of carrying eight bombs or domestically-manufactured Sadid missiles at the same time, and is designed to hit stationary and mobile targets alike.

It has an effective operational radius of 1,700 km in terms of precision targeting, flight endurance of 24 hours on a single fuel run and a flight ceiling of 24,000 feet. It has a monitoring capability of 200 km radius.

Brigadier General Amir-Ali Hajizadeh, commander of the IRGC’s Aerospace Division, said Friday that the drone can help ensure sustainable security for the country.

“Shahed 129 can easily track and identify bandits, terrorists and drug smugglers as well as anyone targeting the Islamic Republic of Iran’s sustainable security and can fire missiles at them upon orders from commanders,” he said.

Mass-produced, the Shahed 129 can now safeguard the country’s frontiers, said the commander.

Iranian military officials have said that the drone can increase Iran’s surveillance capabilities in border areas, the Persian Gulf and the Sea of Oman.

Tehran has repeatedly assured other nations that its military might poses no threat to other countries since the Islamic Republic’s defense doctrine is based entirely on deterrence.