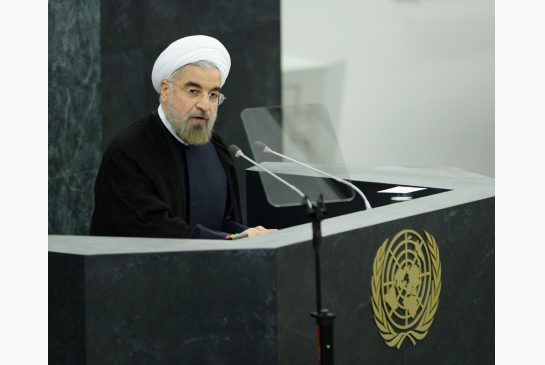 US reaction to Rouhani at UN

Senior U.S. officials have welcomed signals indicating a conciliatory shift in Iran’s foreign policy. “What’s different about President [Hassan] Rouhani is not simply some matter of personality,” a senior administration official said in response to a question about Rouhani’s address to the United Nations. The difference is that Rouhani was “elected expressly on a mandate to pursue a more moderate foreign policy and to achieve a nuclear deal,” the official told the press on September 24.

The Obama administration proposed an informal meeting of the U.S. president and his Iranian counterpart on the U.N. General Assembly  sidelines. But President Rouhani told CNN that the two sides “didn’t have sufficient time really coordinate the meeting.” Meeting with U.S. officials is a “very sensitive subject,” Rouhani told a group of American editors and columnists from top news organizations. “We have not talked at that level for 35 years. We must take these steps carefully,” he said on September 25.
The Obama administration is trying to demonstrate openness “to any type of negotiation,” said a U.S. official in one of two briefings on Iran and the U.N. General Assembly. In a separate statement, a senior State Department official expressed hope that Iran can “chart a path forward” with the world’s six major powers — the United States, Britain, China, France, Germany and Russia. “We are looking forward to having the political directors meet – on a date to be scheduled in October,” said the official. The following are excerpts from White House and State Department press releases.

More than a dozen members of Congress have issued statements indicating skepticism towards new Iranian President Hassan Rouhani’s diplomatic overtures. In a joint statement, Republican senators John McCain (left), Lindsey Graham and Kelly Ayotte supported the Obama administration’s willingness to try diplomacy with Tehran. But they were suspicious about the “real motivations behind Iran’s charm offensive.” Rouhani has committed Tehran to constructive engagement with the outside world in several recent interviews and statements, including his September 24 address to the United Nations.

Other members of Congress were less willing to test Iran’s sincerity through diplomacy. Representative Ileana Ros-Lehtinen argued that now is the “time to deliver the crushing blow” to the regime. A group of 11 Republican senators led by Marco Rubio urged President Obama “to increase pressure on Iran and to stand with the Iranian people, not pursue diplomatic half-measures that will allow their rulers to continue to delay and obfuscate and avoid real reforms.” The following are excerpted statements and letters by members of Congress on Iran and President Obama’s policies.