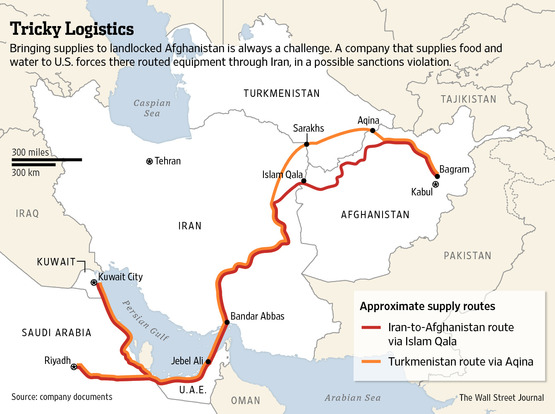 The company that holds the multibillion-dollar Pentagon contract to supply U.S. forces in Afghanistan with food and water brought in supplies to build an Afghan warehouse through Iran, in a possible violation of U.S. sanctions.

Anham FZCO used Iran’s Bandar Abbas seaport last year to land equipment and building materials that were then transported across Iran, according to business executives involved in the process and corporate emails reviewed by The Wall Street Journal. Completing the warehouse at Bagram military base near Kabul put Anham in position to win the Pentagon supply contract, which it did in June 2012.

Anham, which the Journal asked about the matter about two weeks ago, said in a statement on Sunday that it “has made a voluntary disclosure to the Treasury and Commerce Departments that some items were transshipped through Iran.”

Anham said “foreign-produced items shipped by a third party vendor hired by a foreign subsidiary of Anham” were involved, adding that “all or some…may have been eligible for such transshipment under legal exceptions in place at the time.” Anham said it “is working with Treasury and Commerce to fully investigate the matter to determine what occurred and to determine whether any laws were broken.”

The Defense Department unit overseeing the contract, the Defense Logistics Agency, said Anham notified it Monday of its disclosure.

“We have requested additional information from Anham, as well as appropriate government agencies, to confirm that Anham’s actions, including its performance under its contract with DLA, remain in accordance with applicable law and regulations,” the agency said.

The Pentagon has estimated the value of Anham’s multiyear supply contract at $8.1 billion. It has a ceiling of $30 billion in the unlikely event the U.S. ramps up the war again.

Anham said its top executives became aware of the Iranian connection only over the past week.

Anham, which has offices in Virginia as well as in Dubai and Kabul, is owned by a consortium of companies from Saudi Arabia, Jordan and the U.S., according to its website. Its chief executive, A. Huda Farouki, is an American businessman who previously won Pentagon contracts in Iraq. Anham’s managing director, David Braus, is an American based in Vienna, Va. The executives referred questions to the company’s outside press spokesman and legal counsel.

The events illustrate the logistical difficulties confronting the U.S. as it has prosecuted wars on Iran’s borders over the past decade. Washington has long tried to isolate Iran yet intermittently sought its help, such as in toppling Afghanistan’s Taliban government in 2001 and in seeking to stabilize Iraq after Saddam Hussein’s fall, according to current and former U.S. officials. On Thursday, the U.S. plans high-level talks with Iranian officials on the sidelines of the United Nations General Assembly in New York, with the main focus expected to be Iran’s nuclear program.

“The Pentagon has estimated the value of Anham’s multiyear supply contract at $8.1 billion.”

At the time in 2012 when Anham shipped supplies through Iran, a route through Pakistan was temporarily closed, forcing Pentagon contractors to use much more lengthy and expensive routes into Afghanistan through Central Asian countries.

The U.S. Treasury Department said that it doesn’t comment about specific companies but that U.S. law generally bars American citizens and Pentagon contractors from transshipping goods through Iran.

Anham announced its bid for the supply contract in 2011, seeking to become what is known as the Subsistence Prime Vendor to U.S. forces in Afghanistan, according to Afghan corporate registry documents.

As part of its bid, the company was building a food warehouse at Bagram Air Field and getting building supplies through the Pakistan port of Karachi, according to internal communications. That route closed in late 2011 as Pakistan shut its borders to U.S. supplies following a mistaken U.S. airstrike on a Pakistani military outpost that killed 24 soldiers.

Anham then brought in three consignments through Iran, according to company emails and officials briefed on the shipments. These included a delivery of steel from Riyadh, Saudi Arabia; insulation panels from Dubai in the United Arab Emirates; and 28 “lowboy” trailers from Kuwait plus trucks to pull them.

The steel and insulating materials were for the Bagram warehouse near Kabul. The trailers were to help Anham carry out two other Pentagon contracts it already held, helping the U.S. military move cargo around Afghanistan and helping the Afghan military maintain equipment, according to these officials.

“Going forward as you know all steel from [Kingdom of Saudi Arabia] will be collected at the border…and tracked in country by Anham,” an Anham project manager wrote in a Feb. 10, 2012, email to staff members. “I need to know…the full process of transport change at Islam Qala from Iranian transport to [Afghan] transport.” Islam Qala is an Iran-Afghanistan border crossing.

The email also asked to know “full contact details for Iranian transporter so we can coordinate the transshipment from Iranian to [Afghan] transport.”

Anham also used a second route, running north from the seaport through Iran to Turkmenistan, looping through that country and then moving into Afghanistan. These supplies entered Afghanistan at a border crossing called Aqina.

“I just checked with my office in Iran, and they inform me that we are paying 2200/2300 USD to all the companies there in Aqina to move the containers out to Kabul,” an executive from an Anham subcontractor in the U.A.E. wrote by email to other executives on March 11, 2012.

Shipping through Iran, while cheaper than circuitous paths through Central Asian countries, wasn’t without hitches. Emails and officials briefed on the trade described delays inside Iran when Anham’s supplies had trouble getting through customs.

Holidays were a factor. In February 2012, Iran’s Ministry of Road and Urban Development told an Anham subcontractor of problems in moving supplies during the Persian New Year of Nowruz.

“During the above mentioned dates (15 March 2012 to 2 April 2012), the movement of all types of trailers, trucks in intercity roads is prohibited, but the movement of trailers containing perishable or inflammable materials is allowed,” the ministry wrote in a letter to the Anham subcontractor.

Emails reviewed by the Journal that specifically discussed Iranian transshipments weren’t addressed to Messrs. Farouki and Braus, the top Anham executives, but some included Mr. Farouki’s brother, Mazen Farouki. He heads a firm called Unitrans International Inc., which has worked with Anham on past projects. It appears to have been engaged in the transshipments, according to internal emails. A lawyer for Unitrans declined to comment.

Anham submitted a pricing bid for the food-and-water contract last year that was more than $1 billion below the bid of its main competitor, Supreme Foodservice GmbH, according to the U.S.’s Government Accountability Office.

Supreme, a unit of Netherlands-based Supreme Group, had held the food-supply contract in Afghanistan since 2005, services that cost the U.S. government over $8.6 billion. When the Pentagon’s logistics arm awarded the contract to Anham last year, it also granted a separate interim deal valued at an estimated $1.5 billion to Supreme to continue supply work.

Even as Anham began to stock its warehouses this year, Supreme challenged Anham’s award both through the GAO and in court. Late last month the U.S. Court of Federal Claims upheld the award of the contract to Anham. Amid the protests and litigation, it has taken Anham more than a year to begin taking over the contract to supply food and water.