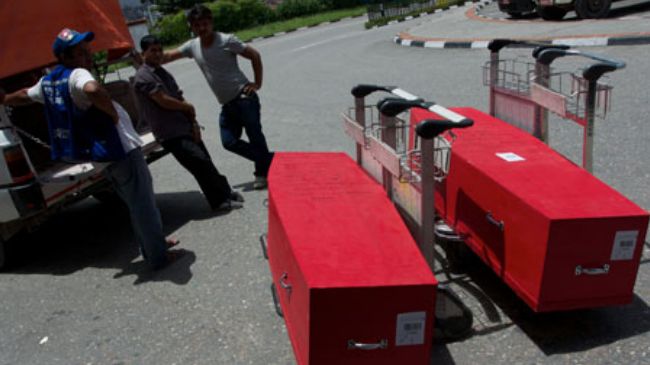 ‘Modern slavery’ exposed in Qatar ahead of World Cup

The coffins of two Nepalese workers killed in Qatar are seen on trolleys at Kathmandu airport before delivery to their families.

Dozens of migrant workers have reportedly died in Qatar and thousands more are being abused or exploited as the country is preparing to host the 2022 World Cup.

An investigation by British newspaper the Guardian said on Wednesday that at least 44 Nepalese laborers died in Qatar between June 4 and August 8.

The probe, citing documents from the Nepalese Embassy in Doha, explained that many of the victims died of heart attack, heart failure, or workplace accidents.

It also found evidence of forced labor on a huge World Cup infrastructure project, noting that some Nepalese men had allegedly not been paid for months.

Some Qatari employers refuse to pay the workers for months to prevent them from running away, the report said, while others routinely confiscate passports and refuse to issue ID cards, reducing the foreigners to the status of illegal migrants.

The Nepalese make up the single largest group of workers in the Arab emirate in the Persian Gulf.

The Guardian report also said that a number of laborers had fled to the Nepalese Embassy due to abuses and brutal conditions at work, which amount to “modern-day slavery” as defined by the International Labor Organization.