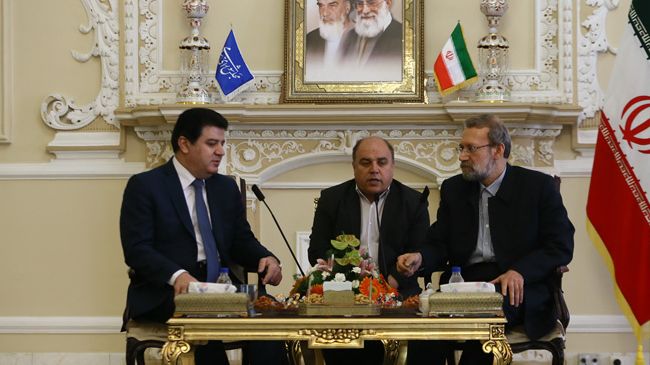 Iran’s Majlis Speaker Ali Larijani has reaffirmed Tehran’s backing for a political solution to the crisis in Syria, rejecting a military approach against the Arab country.

“Since the onset of the Syria crisis, the Islamic Republic of Iran has always stressed the need to find a political solution [to the turmoil] through negotiations among Syrian groups and parties, and it believes that the Syria crisis has no military solution,” Larijani said in a meeting with Syrian Ambassador to Tehran Adnan Mahmoud on Wednesday.

Larijani said that the Iranian parliament supports any measure aimed at heading off foreign intervention in Syria, and will continue to back the Syrian nation and government against attacks by terrorist groups.

He also denounced as unfair the recent propaganda campaign to promote foreign military intervention in Syria.

The Iranian official also praised the Syrian people’s resistance against terrorists as the greatest asset of the country, adding that the nation will emerge victorious through resistance.

Mahmoud, for his part, thanked Iran for its support for the Syrian nation and government.

He said that Syrian President Bashar al-Assad’s political initiative, offered earlier this year, was the best solution to the crisis, and added that holding free elections without any preconditions was the core of the president’s plan.

In January, Assad offered a political plan aimed at putting an end to the conflict in Syria, which included the holding of general elections.

The recent war rhetoric against Syria first gained momentum on August 21, when the militants operating inside the country and the foreign-backed Syria opposition claimed that over a thousand people had been killed in a government chemical attack on militant strongholds on the outskirts of Damascus.

Reports indicate that Western powers and their regional allies, especially Qatar, Saudi Arabia, and Turkey, are supporting the militants operating inside the country.