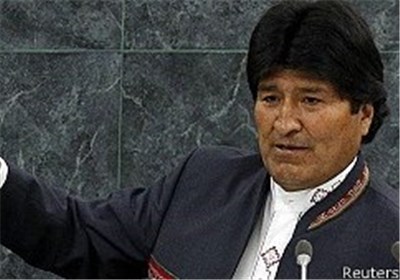 TEHRAN (Tasnim) – Bolivian President Evo Morales accused the United States of harboring terrorists while calling for the United Nations to leave New York City in his speech to the 68th General Assembly.

He also told the assembled dignitaries on Wednesday that he didn’t feel safe in the United States because of spy and security concerns.

“I would like you to be aware that the United States harbors terrorists and the corrupt,” said Morales, the long-time leftist leader from South America. “They take refuge here, and the United States does not help in the fight against corruption.”

Hardly a friend of US President Barack Obama, Morales threatened to boycott the UNGA and said he planned to sue the United States for crimes against humanity.

During his speech, Morales said he was disappointed by Obama, whom he once supported in his push for an end to war, Global Post reported.

“Now we are seeing the opposite of this,” Morales said.

Morales drew American ire when it evicted the US Agency for International Development, accusing the non-governmental organization of “conspiring against Bolivia.”

He again addressed the issue on Wednesday, saying “we’ve put an end to USAID, which was conspiring.”

Another recent source of friction between the US and Bolivia began when Morales’ airplane was forced to land in Austria during a search for ex-NSA contractor and whistleblower Edward Snowden.

Bolivia was among the countries that offered Snowden asylum while he was a fugitive in diplomatic limbo this summer.

That prompted Morales to call for a UNGA boycott and an announcement that he planned to sue the US for “its policy of intimidation and blockading international flights.”

“Anti-capitalist, anti-imperialist presidents do not feel safe in US territory,” Morales said, according to the Buenos Aires Herald. “We all go, or no one goes.”