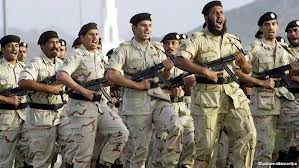 TEHRAN (FNA)- Two Saudi National Guard soldiers were killed in an accidental blast during a training mission East of Riyadh.

A “bomb exploded inside an army vehicle, burning it completely,” Muqbel said, adding that an investigation looking into the incident had been launched, AFP reported.

The National Guard is Saudi’s parallel army and a pillar of the ruling Al Saud family. Members are recruited from tribes that have traditionally backed monarchy’s rule, which was established in 1927.

AFP reports that the National Guard is a trained army of between 180,000 and 200,000 men, who are divided into infantry units, mechanized brigades, special units and military police.

It operates in parallel, and as a palace-directed counter balance, to the regular Saudi ground forces.

The National Guard is largely concerned with supporting the Saudi interior minister in ensuring the Kingdom remains stable and combatting terrorism. If necessary, it also helps the defense ministry.

In May, King Abdullah decreed the unit become a ministry, which is headed by his son Prince Mitab.

King Abdullah himself led the National Guard from 1962 until 2010, when he transferred command to Mitab.