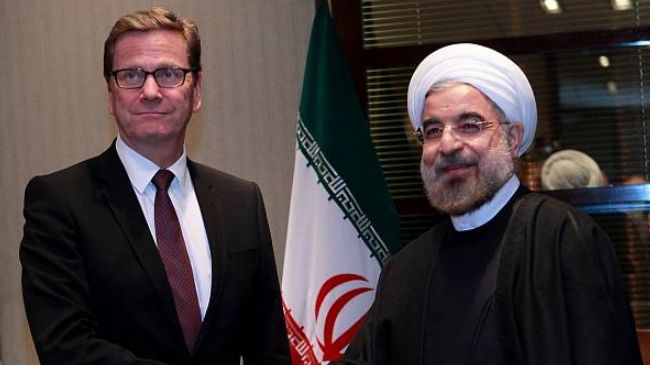 Iranian President Hassan Rouhani has lashed out at US-led sanctions imposed against Iran over the county’s nuclear energy program.

In a meeting with German Foreign Minister Guido Westerwelle on Tuesday, Rouhani said, “We are opposed to cruel and unilateral sanctions, because these bans are illegal and inhuman.”

The meeting took place on the sidelines of the 68th session of the UN General Assembly in New York.

Referring to the negotiations, mainly focusing on Iran’s nuclear energy program, between Iran and the group of six countries (five permanent members of the UN Security Council plus Germany) Rouhani said, “We should be more active in the P5+1 talks, so that this issue could be wrapped up as soon as possible.”

Expressing hope that Germany would play a more effective role in resolving the issue, Rouhani said the European side apparently shares Iran’s resolve to deal with the matter.

In his address to the United Nations General Assembly, Rouhani reiterated that the Iranian nation was ready for cooperation with the international community and all rational players on an equal footing and based on mutual respect.

“Nuclear weapons and other weapons of mass destruction have no place in Iran’s security and defense doctrine, and contradict our fundamental religious and ethical convictions,” Rouhani said on Tuesday.

Westerwelle, hailed the Iranian president’s speech as a “constructive approach.”

The German foreign minister added that Berlin favors the easing of sanctions and seeks a political and diplomatic settlement of the nuclear dispute.

Iran rejects the allegation, arguing that as a committed signatory to the nuclear Non-Proliferation Treaty and a member of the International Atomic Energy Agency (IAEA), it has the right to use nuclear technology for peaceful purposes.