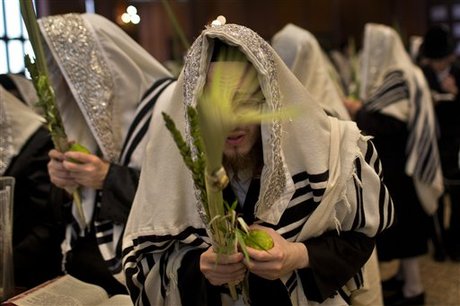 The Sukkot holiday has come at a time of raised hopes for the small Jewish community in Iran of a new approach towards minorities under the Islamic republic’s new President Hasan Rouhani.

In a radical about-turn from his Holocaust-denying predecessor, Rouhani, in an interview with CNN, condemned the Nazi genocide as a “reprehensible” crime.

“Any crime that happens in history against humanity, including the crime the Nazis created toward the Jews, is reprehensible and condemnable,” he told the U.S. network in an interview Tuesday.

Those who have chosen to remain — scattered across Iran but mostly in Tehran, Isfahan and Shiraz — “have an easy life,” Tehran’s Jewish community head Homayoun Sameyah Najaf Abady told Agence France Presse.

“We do not have a problem. The government does not create problems for us,” he said in a Sukkot prayer ceremony in the Abrishami synagogue in the center of the capital, attended by some 200 faithful.

One of the 10 active synagogues in Tehran, Abrishami, which can accommodate 500 people, is adorned with marble floors and walls and chandeliers.

A large hut with glass walls has been set up on its roof to host families for the duration of the week-long festivity as they mark the exodus of the Jewish people from captivity in Egypt, in the Old Testament.

“We pray for it to rain, as it is a sign of good fortune for the entire year to come,” said Eliza Masoudi Panah, a mother in her 40s accompanied by her teenage daughter under the hut.

Recognized as a religious minority, along with Christians and Zoroastrians, the Jewish community has a representative in parliament and appears to be well-integrated in a society dominated by Muslims.

It operates schools, a library and a hospital — funded in part by public funds — in Tehran.

But they hope that with the presidency of Rouhani, a moderate mid-ranking Shiite cleric who took office in August, their standing will improve.

“We welcome the approach of the new government towards minorities,” he said referring to messages from Rouhani and his foreign minister, Mohammad Javad Zarif, wishing Jews worldwide a happy New Year in early September.

Sameyah says he was unfazed by the regular anti-Israeli tirades of Ahmadinejad and other Iranian officials over the past eight years during his two terms in office.

“The political differences between Iran and Israel do not affect us,” he said. “Jews of Iran are Iranians first. We live with the same economic problems faced by our compatriots.”

Iran’s economy has been hard hit by Western sanctions targeting its vital oil sector and access to the global banking system, leading to massive depreciation of its currency and raging inflation.

The sanctions aim to force Tehran to cut back on its controversial nuclear activities, which Western powers and Israel suspect mask military objectives despite repeated Iranian denials.

Sameyah stressed he is well respected as a minority member and that he has friends both within the paramilitary Basij volunteer force and the elite Revolutionary Guards who “respect me and my religion.”

However, he admits to grievances with the state broadcaster which “fails to distinguish between Jews and Zionists” — the Islamic republic does not recognize Israel as a state.

There are other cases of discrimination, Sameyah said, including a bar on holding high public office.

“Important offices are out of the question. In a bank, for example, the furthest we go can is become the deputy,” he said.

But this is “not a major issue” he added with a smile. “As you know, we are good with money. Most of us are in the private sector.”