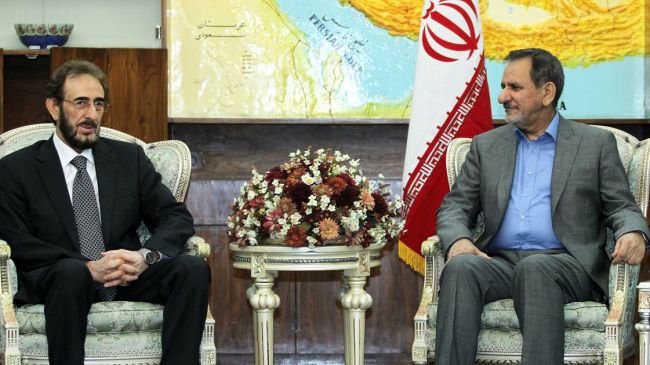 Iran’s First Vice President Es’haq Jahangiri says Iran and Iraq can play an “important and influential” role in the establishment of peace, stability and security in the Middle East.

In a meeting with the visiting Iraqi Defense Minister Saadoun al-Dulaimi in Tehran on Tuesday, Jahangiri also urged enhanced cooperation with Iraq in all sectors.

“Iran is ready to transfer its experience in the fields of reconstruction, defense and security affairs to its Iraqi brothers,” he said.

Jahangiri stressed the importance of adopting measures to prevent acts of terror in Iraq and added that the presence of terrorist groups including the Mujahedin-e Khalq Organization (MKO) had seriously damaged the security of Iranian and Iraqi nations.

On September 7, the Iraqi government ordered the remaining members of the MKO terrorist group to immediately evacuate Camp Ashraf after over 70 terrorists, including top MKO commanders, were killed in an attack on the camp in Iraq’s eastern Diyala Province.

Jahangiri said Iran sets no limit to the expansion of ties with Iraq, adding that the two countries enjoy great potentials for bolstering economic cooperation.

The Iraqi defense minister, for his part, expressed his country’s readiness to strengthen joint cooperation with Iran, saying Tehran and Baghdad should establish a regional security system to block enemies’ moves.

Dulaimi hoped the two countries would expand cooperation to establish security in the region.