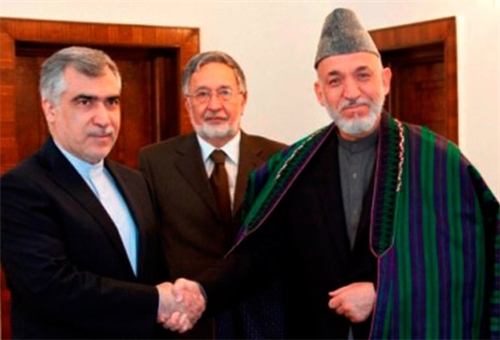 Afghan president calls for expansion of ties with Iran

TEHRAN (FNA)- Afghan President Hamid Karzai, in a meeting with outgoing Iranian Ambassador to Kabul Abolfazl Zohrehvand, underlined the need for the further expansion of bilateral ties between Tehran and Kabul.

During the meeting in Kabul on Wednesday, President Karzai pointed to the cultural and historical commonalities between the Iranian and Afghan nations, and said, “Tehran and Kabul should keep on their mutual cooperation.”

The Afghan president also voiced his satisfaction with Zohrehvand’s performance during his tenure in the Muslim country.

The Iranian ambassador, for his part, thanked the Afghan nation and government for their hospitality during his mission in Afghanistan.

Iran has also contributed more than $50 million annually to Afghan anti-narcotics efforts in the last 8 years.