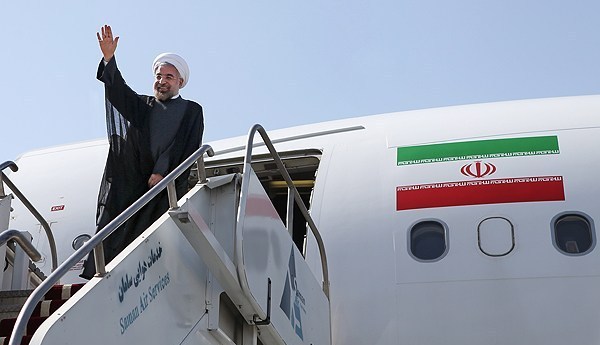 Iranian President Hassan Rouhani has arrived in New York to attend the 68th annual session of the UN General Assembly and deliver a speech before the world leaders.

“According to the schedule during this trip I have three speeches. The first one will be at the United Nations General Assembly. The second speech will be at the UN Disarmament Conference and the last one is the meeting of the foreign ministers of the Non-Aligned Movement (NAM),” he told reporters upon arrival at the John F. Kennedy International Airport on Monday afternoon local time.

He added that he plans to expound on Iran’s position on international issues during his stay in New York. The Iranian president further noted that he is determined to defend the rights of the Iranian nation.

Rouhani will attend the opening session of the UN General Assembly on September 24. The Iranian president will make his speech later in the day.

On September 25, Rouhani is due to address the special session of the Nuclear Disarmament Conference as the current chairman of the NAM.

He will also address foreign ministers of the NAM, which is an international organization with 120 member states. Nearly two-thirds of the countries of the UN are also NAM members.

In addition, the Iranian president is expected to meet and hold talks with world leaders, American scholars, US Muslim leaders, and a group of Iranian expatriates on the sidelines of the General Assembly meeting.