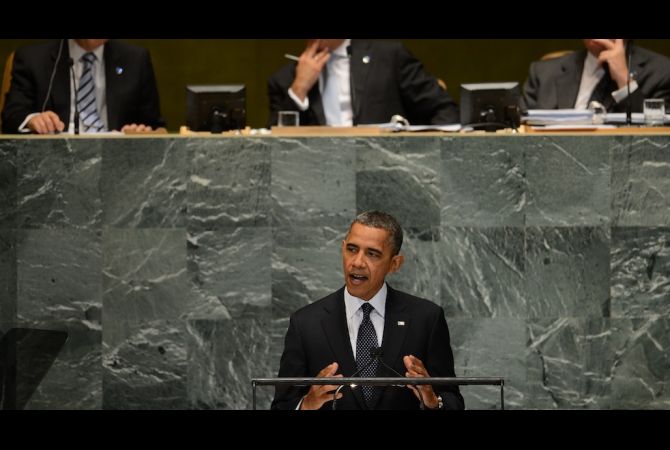 Obama urges U.N. to back tough consequences for Syria over chemical weapons

(Reuters) – U.S. President Barack Obama urged the United Nations on Tuesday to back tough consequences for Syria if it refuses to give up chemical weapons and urged Russia and Iran to drop their backing of Syrian President Bashar al-Assad.

Speaking to the U.N. General Assembly, an annual gathering of world leaders, Obama laid out U.S. priorities for the volatile Middle East and North Africa. He stressed that the United States wants diplomatic outcomes to festering disputes, but does not rule out the use of military force or direct action against extremist threats.

Obama stepped back from launching unilateral military action against Syria early this month, setting in motion a diplomatic effort that led to Russian assistance in persuading Syria to agree to give up its chemical weapons after a poison gas attack on August 21 that U.S. officials say killed 1,429 people.

With Syria’s promise not yet fulfilled, Obama’s challenge at the United Nations was to persuade world leaders to join in applying pressure on Syria with a U.N. Security Council resolution that includes tough consequences should Assad not surrender his chemical weapons stockpiles in a verifiable way.

“The Syrian government took a first step by giving an accounting of its stockpiles. Now, there must be a strong Security Council resolution to verify that the Assad regime is keeping its commitments, and there must be consequences if they fail to do so,” said Obama.

The worry from the U.S. side is that Russia might veto any U.N. resolution that contains an explicit threat of military force against Syria.

Prospects for an agreement between Russia and the West on a draft resolution may be improving, with Western powers giving up on what U.N. diplomats call a “trigger” clause for automatic punitive measures in the event of Syrian non-compliance.

Obama said if Syria ultimately surrenders its chemical weapons, that should energize diplomatic efforts to persuade Assad to give up power after 2-1/2 years of civil war in which more than 110,000 people have been killed.

Obama had an explicit message for Assad’s two biggest backers, Iran and Russia: The notion that Syria can return to a pre-war status quo “is a fantasy.”

“It’s time for Russia and Iran to realize that insisting on Assad’s rule will lead directly to the outcome they fear – an increasingly violent space for extremists to operate,” he said.

He also seemed to specifically reject Russian President Vladimir Putin’s recent criticism of Americans’ belief of “American exceptionalism,” a view that Obama has repeated, as have other U.S. presidents, to justify U.S. intervention abroad.

“Some may disagree, but I believe that America is exceptional – in part because we have shown a willingness, through the sacrifice of blood and treasure, to stand up not only for our own narrow self-interest, but for the interests of all,” he said.

Obama announced the United States will provide an additional $339 million in humanitarian aid to ease the Syrian refugee crisis, including $161 million for people inside Syria and the rest for surrounding countries.

In his 43-minute speech, Obama tried to boost prospects for Middle East peace as the United States seeks to nurture direct negotiations between Israel and the Palestinians.

Obama, who will meet Palestinian President Mahmoud Abbas later on Tuesday and next week will sit down with Israeli Prime Minister Benjamin Netanyahu, said the time is ripe for the international community to get behind the pursuit of peace.

Amid concern about the rise of violence in Africa after an attack on a mall in Nairobi, Kenya by the Somali militant group al-Shabab, Obama said the United States must reserve the right to defend its core interests.

“We will dismantle terrorist networks that threaten our people. Wherever possible, we will build the capacity of our partners, respect the sovereignty of nations, and work to address the root causes of terror,” he said. “But when it’s necessary to defend the United States against terrorist attacks, we will take direct action.”