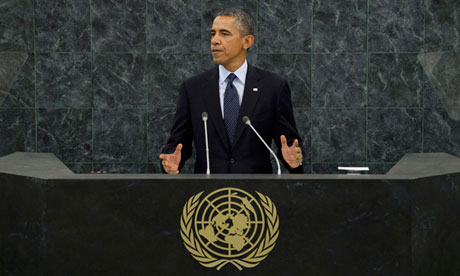 Obama tells UN that diplomatic path must be tested with Iran

President Obama on Tuesday pledged to focus his foreign policy efforts on the Middle East, stepping up efforts to reach an agreement on Iran’s nuclear programme and leading an international push to support the creation of a Palestinian state as a solution to the Arab-Israeli conflict.

In a mark of the importance and urgency with which the White House treats the need for a nuclear deal with the new Iranian president, Hassan Rouhani, Obama assigned his secretary of state, John Kerry, to oversee negotiations with Tehran. In the past those talks had been led by a succession of State Department diplomats, and critics had complained there was no one in the administration who was in charge of US-Iran policy.

He also offered Rouhani an important symbolic gesture, making the first official US acknowledgement of the CIA’s well-documented role in the ousting of Iran’s democratically-elected government in 1953.

President Obama’s speech, delivered from the podium of the UN general assembly, represented a striking admission that his administration’s attempt to “pivot to Asia” had been stymied by the intractable nature of the Middle East’s problems, and by the danger of the spread of weapons of mass destruction in the region, such as last month’s use of chemical weapons in Syria.

Obama said that if the UN security council failed to pass a strong resolution enforcing the dismantling of the Syrian regime’s chemical weapons arsenal, then the institution would show itself “incapable of enforcing the most basic of international laws”.

However, in his UN speech Obama made clear that the US saw the Iranian nuclear programme as a much more immediate and serious threat to its core interests, and he responded to the overtures of the newly-elected leadership in Tehran by putting Kerry in charge of the coming critical weeks of intense negotiations.

“Given President Rouhani’s stated commitment to reach an agreement, I am directing John Kerry to pursue this effort with the Iranian government, in close coordination with the European Union, the United Kingdom, France, Germany, Russia and China,” the president said.

The move mirrored Rouhani’s decision to put his own foreign minister, Mohammad Javad Zarif, in charge of the talks, breaking from the practice of the past eight years of abortive negotiations of assigning them to senior officials. The foreign ministers of all seven countries are due to meet for the first time at the UN on Thursday.

“Directing Secretary Kerry to lead this signals that the negotiations may be elevated to the foreign minister level, which would be very good news,” said Trita Parsi, the head of the National Iranian American Council, and the author of a book on US-Iranian negotiations, A Single Roll of the Dice.

“This means that far greater political will is being invested into the diplomatic process, which in turn increases the cost of failure. That is exactly what is needed to overcome the political obstacles to a deal.”

Obama acknowledged the difficulties ahead. “The roadblocks may prove to be too great, but I firmly believe a diplomatic path must be tested,” he said.

Referencing the US involvement in a 1953 coup, Obama said: “This mistrust has deep roots. Iranians have long complained of a history of US interference in their affairs, and America’s role in overthrowing an Iranian government during the cold war.”

The reference to the CIA’s part in the ousting of Mohammad Mosaddegh, Iran’s democratically elected leader, marked a first official admission of that role, and represented an important gesture to Rouhani. It will be seen in Iran as a diplomatic victory and belated acknowledgement of a long-festering Iranian sense of injustice. The coup, support by both the US and the UK, paved the way for the dictatorship of the shah, and then the 1979 Islamic revolution against it.

“I don’t believe this difficult history can be overcome overnight. The suspicions run too deep. But I do believe if we can resolve the issue of Iran’s nuclear programme that can be a major step,” Obama said.

Recalling that he had personally written to President Rouhani, and before that to Iran’s supreme leader Ali Khamenei, Obama declared that “America prefers to resolve our concerns peacefully” and reassured both Iranian leaders that the US had no desire to seek regime change in Tehran.

Obama also acknowledged that Ayatollah Khamenei had issued a fatwa (a religious ruling) against the development of nuclear weapons, which was echoed by Rouhani’s more recent insistence that Iran would never make a bomb.

These statements made by our respective governments should offer the basis for a meaningful agreement. We should be able to achieve a resolution that respects the rights of the Iranian people, while giving the world confidence that the Iranian program is peaceful. To succeed, conciliatory words will have to be matched by actions that are transparent and verifiable.

Turning to the Israeli-Palestinian conflict, Obama had no new initiatives to announce. Instead, the significance of the speech for the region was the centrality he gave the issue to US foreign policy goals in the remaining three years of his presidency. It represented a response to criticisms that his administration had pursued a hands-off policy in the region because of the enormity of the obstacles to peace.

Obama said: “I believe there is a growing recognition within Israel that the occupation of the West Bank is tearing at the democratic fabric of the Jewish state.”

The time was now ripe for the entire international community to get behind the pursuit of peace, Obama said. “Now, the rest of us must also be willing to take risks.”

“Real breakthroughs on these two issues – Iran’s nuclear program and Israeli-Palestinian peace – would have a profound and positive impact on the entire Middle East and north Africa,” Obama said.

Obama also used the speech as an opportunity to drive home his demand for a strong UN security council resolution on Syria that would require the Assad regime to submit its chemical weapons supplies to international control or face tough consequences. The search for a draft resolution has been delayed in recent days with Russia objecting to any inclusion of a threat of force in the event of Syrian non-compliance.

In words that were clearly directed at Russia’s president Vladimir Putin, who has acted as Assad’s main ally throughout the chemical weapons crisis, Obama said that the evidence was overwhelming that the Syrian government had unleashed sarin gas against its own civilians. “It is an insult to human reason – and to the legitimacy of this institution – to suggest that anyone other than the regime carried out this attack.”

Obama pitched the search for a security council resolution on Syria in grand terms, saying that the credibility of the entire UN system as a means to resolve conflict depended on it. A failure by the security council to agree on a resolution would have significant consequences: “It would show that the UN is incapable of enforcing the most basic of international laws. On the other hand, if we succeed, it will send a powerful message that the use of chemical weapons has no place in the 21st century, and that this body means what it says.”

In an implicit rebuke to Putin, who earlier this month in an article in the New York Times, criticised Obama’s belief in US exceptionalism, Obama said: “Some may disagree, but I believe that America is exceptional – in part because we have shown a willingness, through the sacrifice of blood and treasure, to stand up not only for our own narrow self-interest, but for the interests of all.”