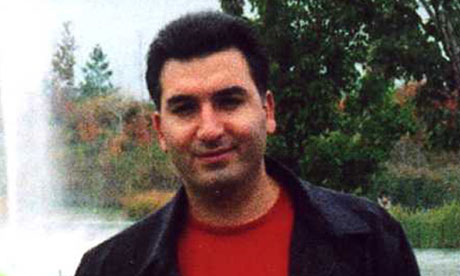 Iranian-Canadian sentenced to death has been released, his wife says

As president Hassan Rouhani travels to New York, Iran releases Hamid Ghassemi-Shall, who was sentenced to death for spying.

Iranian authorities have released an Iranian-Canadian man who had been sentenced to death for espionage and having links with an opposition group, his wife has told the Guardian.

Hamid Ghassemi-Shall, 44, was detained after arriving in Tehran from Canada in May 2008. He was later convicted of gathering information for the Iranian militant group Mujahideen e-Khalq (MEK).

Ghassemi-Shall’s wife, Anatonella Mega, told the Guardian from Canada he was released on Monday and that she had spoken to him on the phone, but she was still unsure about the conditions under which he had been allowed to leave prison. It was not clear whether Ghassemi-Shall had been released permanently.

“I don’t know if he will be allowed to leave the country or not at the moment,” Mega said. “But I am relieved that at least for now he’s outside jail.”

Iran’s president Hassan Rouhani arrived in New York late on Monday to attend the UN general assembly. Before Rouhani’s arrival, Iran’s judiciary announced that the country’s supreme leader, Ayatollah Ali Khamenei, had pardoned 80 political prisoners. It was not clear if Ghassemi-Shall was one of them.

Mega said Ghassemi-Shall had spent 18 months in solitary confinement at Tehran’s notorious Evin prison, with no access to his family or legal representation. She said he was tried in 2009 in a court hearing that lasted a few minutes.

He was convicted and given a death sentence on the basis of what officials said was an email to his brother Alborz in which, they said, he asked for some information to be collected for the MEK. Ghassemi-Shall’s family say he neither wrote nor sent such an email. Alborz died in prison in 2010 from stomach cancer, according to officials.

Human rights organisations, including Amnesty International, have campaigned for his release, complaining that he was subject to mistreatment and an unfair trial.

Iran does not recognise dual citizenship and considers those who hold it only as Iranian.