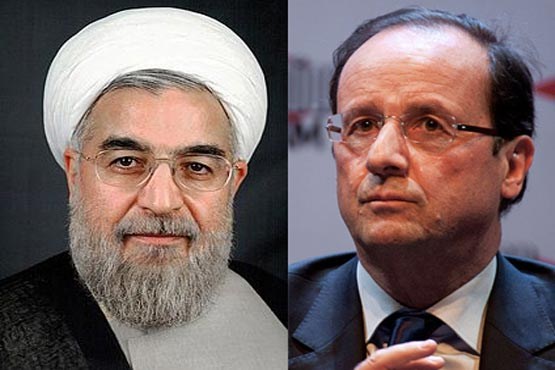 (Reuters) – Ahead of a meeting with Iran’s president, French President Francois Hollande said on Tuesday he expects “concrete gestures” by Iran to show it will give up a military nuclear program.

Hollande is due to meet with President Hassan Rouhani later on Tuesday on the sidelines of the annual gathering of world leaders at the United Nations.

“France expects of Iran concrete gestures which will show that this country renounces its military nuclear program even if it clearly has the right to pursue its civilian program,” Hollande told the U.N. General Assembly.

“This is why I have made the choice to engage in direct and open dialogue with President Rouhani. But I will also say … I am in favor of dialogue but just as strongly I am firm on the issue of nuclear proliferation,” he said.

Since Rouhani was elected president in June, the centrist cleric has called for “constructive interaction” with the world, a dramatic shift in tone from the strident anti-Western and anti-Israeli rhetoric of his predecessor, Mahmoud Ahmadinejad.

The United States and its allies suspect Iran is seeking nuclear bomb-making capability despite Tehran’s insistence that its atomic program has only peaceful aims. Rouhani has vowed that his government would never develop nuclear weapons.

Tough sanctions imposed by Washington and the United Nations over the issue have taken a severe toll on Iran’s economy.

“We must ensure that this war ends. It is the deadly war since the beginning of this century. The solution is a political one and too much time has been lost,” he said.