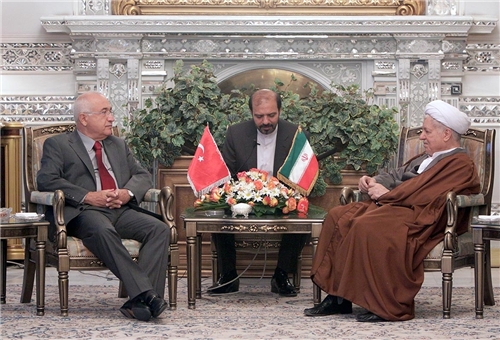 Rafsanjani pointed to the recent developments in the regional Muslim nations, and said, “Sagacious leaders should not allow extremists, specially the Salafis, to disturb people’s everyday life and living under religious pretexts.”

Rafsanjani also pointed to the political developments in Afghanistan, Pakistan, Iraq, Egypt, Tunisia, Syria, Yemen, Bahrain and other parts of the Muslim World, and said, “It is regrettable that these extremists are publicized as Islam’s voice in the world, while Islam is the religion of brotherhood, equality and respect for others’ beliefs and rights.”

The Turkish parliament speaker, for his part, voiced concern over the actions taken by radical groups to impair the relations between states and people, and said extremists have blocked the path of the regional Arab nations to democracy.

“A political winter has overwhelmed many countries and extremist groups do not let the sun of moderation shine for the Arab Spring in the sky of the governments’ political will.”

Earlier this year, former Iranian Foreign Minister Ali Akbar Salehi also issued a stern warning against the spread of a new wave of Islamophobia by the West and through its support for extremist and Takfiri groups, including the al-Qaeda, in Muslim countries.

“The West has created several radical groups under different names such as Takfiri, al-Qaeda, … in Muslim countries to portray Islam as a radical religion to the international community and propagate Islamophobia,” Salehi said, addressing a press conference in Tehran in August.

Salehi underlined that the arrogant powers are trying hard to spread Islamophobia throughout the world.