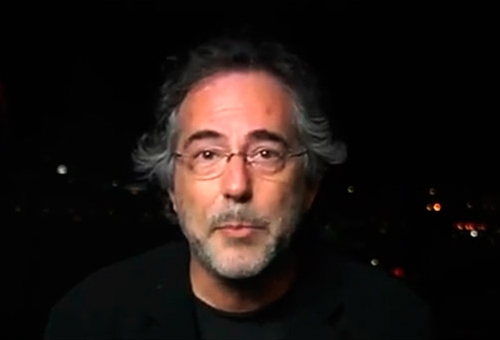 Pepe Escobar: CW destruction in ME should include Israel’s arsenal

“Nobody is talking about Israel’s huge chemical and nuclear weapons arsenal, as they should also be part of the program for the destruction of chemical weapons in the Middle East “,said Pepe Escobar in an interview with the Fars News Agency.

Pepe Escobar is a Brazilian investigative journalist. He initially became famous in Brazil during the 80s, writing cultural criticism for the Folha de So Paulo newspaper. His distinctive style proved to be popular and he is still an influence among many Brazilian journalists. He has worked as a foreign correspondent since 1985, living in Los Angeles, Paris, Milan, Singapore, Bangkok, and Hong Kong. He has focused on Central Asia and the Middle East since the late 1990s. He writes a column- The Roving Eye- for Asia Times Online, as well as regular pieces for Al Jazeera, and Tom Engelhardt’s TomDispatch.com. His columns have been mirrored at Michael Moore.com, The Nation, and The Huffington Post.

Pointing to the recent threats against Syrian government, Escobar argues that there are powerful interests itching for war who should not be underestimated.

Escobar also maintains that there are substantial sectors of the industrial-military complex – including their think tanks; the Israel lobby, especially via AIPAC and WINEP; the neo-cons, which may be dead but not buried; the House of Saud; and sections of US corporate media such as the CNN.

What follows is the text of FNA’s interview with Brazilian investigative journalist Pepe Escobar.

Q: What do the American and world public think of any military intervention in Syria? And why?

A: The world public opinion, from the very beginning, was overwhelmingly against a US attack on Syria. This was reflected at the G20 in St. Petersburg, where the BRICS group of emerging powers, plus Indonesia and Argentina, were forcefully against it; their leaders represent around 3.2 billion people. The British and French public opinion was also against it, although their governments – certainly nostalgic of their imperial days, when the Sykes-Picot agreement could divide the Middle East – were pro-war. The Turkish public opinion was against it. Even the US public opinion was against it; phone calls to most members of the US Congress were anti-war, running at a rate reaching 100 to 1. The bottom line; Washington’s coalition of the willing this time was reduced to the government of France, plus “support” from Britain, Persian Gulf petro-monarchies and Turkey. Not to mention that even Washington itself was divided.

All across the developing world, informed public opinion clearly identifies the inbuilt logic of war of the American Empire. The difference – compared to the invasion and occupation of Iraq 10 years ago – is that the global public opinion is not intimidated by Washington anymore, and developing countries are busy working instead of being scared of imperial tantrums. A good example is that while the Obama administration was threatening to launch a war, China’s President was traveling the Silk Road doing deals. And at the SCO meeting in Kyrgyzstan, both President Putin and President Xi met with Iranian President Hassan Rouhani. This is called diplomacy – compared to Washington’s trademark, bipartisan modus operandi of intimidation, sanctions and threats of outright war.

Q: What will the US Congress decide on the intervention case? What do congressional and constituency offices tell us on any upcoming voting in the Senate or the House?

A: The Russian proposal for the Syrian chemical weapons to be handed over to the OPCW and then destroyed in fact prevented an overwhelming defeat for the Obama administration – and in fact saved his presidency. Yet in another typical demonstration of American exceptionalism, the White House is trying to steal the credit from the Russians. The White House might have carried the voting in the Senate, with a slight margin. But defeat in the Congress was all but certain. Worryingly enough, the Senate Foreign Relations Committee had approved a resolution that would give the US government virtual carte blanche to mercilessly bomb Syria towards regime change – a la Iraq and Libya. In Congress though, the White House message was largely interpreted as being extremely muddled; there was a feeling the proposed strikes would not be strong enough to change the regime; and if they eventually led to regime change, nobody knew what chaos would follow, with the possibility of jihadis getting very close to power.

Q: What were the reasons that Obama devolved the decision on military attack to the Congress?

A: Obama was cornered by his own, reckless, self-imposed “red line” – which actually cornered his nation’s entire foreign policy. The inside spin in Washington is that the solution to pass the ball to the Congress was a last-minute ploy, with Obama in utter desperation. We should not forget that the White House had deployed a monster PR seduction operation to convince the Senate and the House to launch a strike. We were virtually on the brink of war when Moscow, with a deft diplomatic move, seized the initiative and turned the tables on the war logic. President Putin is a master geopolitical chess player. Obama, surrounded by a bunch of sycophantic amateurs, cannot even play checkers.

Q: What consequences can a military strike against Syria have in the country and the region? What will happen if rebels take control in Syria? Will it be safer?

A: The consequences of a strike would be horrendous – because Iran and Hezbollah had already stressed this would be a red line. The Pentagon itself is the first to admit it “does not do pin pricks” – as Obama suggested. The first strike would be overwhelming – with over 50 sensitive sites targeted, and it would certainly elicit a response from Syria, and subsequently from Hezbollah and Iran. Escalation, then, would be inevitable. Not to mention the possibility of yet another false flag launched by some “rebel” faction – leading to direct Israeli involvement.

The “rebels” simply don’t have a structure to “take control” of Syria; they are overwhelmingly myriad gangs of opportunists, thugs, petty criminals – and foreign mercenaries, paid with Saudi and Qatari funds. Our best sources confirm over and over again that the real, hardcore fighting forces are always al-Qaeda-style or linked jihadi outfits. Civilian populations who are unfortunate enough to be in contact or partially ruled by them, once they’ve experienced it, immediately revert to supporting the government. In the – unlikely – eventuality the “rebels” would take over in Damascus, Syria would be infinitely worse off than Libya, or even Somalia; a “Somalized” country subjected to warlords and militias.

Q: There’s a perception in the West that if Syria is attacked, Damascus and its allies will not react or respond to it. Do you think that Syria and its allies naming Russia and Iran will certainly not react to this?

A: Damascus would respond in proportion to the lethality of a US attack. If the White House decided to launch a few Tomahawks over semi-deserted barracks, nothing would happen. But if the decision was to hit the Syrian government’s command and control centers, and also civilian infrastructure, with large “collateral damage”, the response would be forceful, including those lethal Yakhont anti-ship missiles. Hezbollah would help. Iran certainly would help – and not only logistically. And Russia would help with intel, and could also speed up the delivery of a new batch of state of the art weapons.

Q: Russia has proposed to keep Syrian chemical weapons under international control, provided that any strike against Syria is removed. Damascus welcomed this initiative. What is your take on this? Will it decrease the possibility of any attack against Syria? Or the West will find another pretext to attack the country?

A; The Russian proposal is actually a Damascus-Tehran-Moscow proposal, carefully discussed in detail even before Kerry’s famous “slip” – which provided the opening for Mr. Lavrov to jump in. The devil is in the details, as usual. Washington and Moscow have – in theory – arrived at a plan that does not include the threat of an attack on Syria if anything goes wrong. Yet, we should not underestimate those powerful interests who are itching for war. They are: substantial sectors of the industrial-military complex – including their think tanks, the Israel lobby, especially via AIPAC and WINEP, the neo-cons, which may be dead but not buried, the House of Saud, and sections of US corporate media such as CNN. Very important; nobody is talking about Israel’s huge chemical and nuclear weapons arsenal, as they should also be part of the destruction of chemical weapons all across the Middle East. And there’s always the possibility, further on down the road, of yet another false flag operation, launched by those “rebels” controlled by Bandar Bush, to once again lure Washington into attack mode. This is far, far from over.