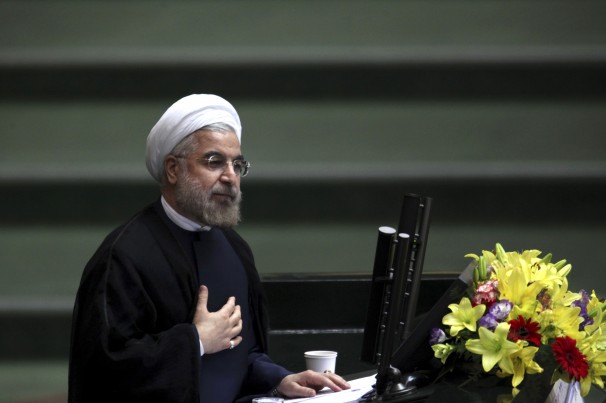 TEHRAN — Iranian President Hassan Rouhani chose an unlikely setting on Sunday to underscore his government’s new opening to the West — a military parade, which has been used in past years to showcase new weapons or progress on Iran’s nuclear program.

In a speech, Rouhani said that if the United States and other Western nations “accept the rights of Iranians, our nation will stand for peace, friendship and cooperation, and together we can solve regional and even global problems.”

Although Rouhani touted Iran’s military might and reiterated that it had the right to enrich uranium, he suggested that his government and Western powers could get past their differences — something that few Iranian leaders have conceded in recent years.Rouhani’s speech came two days after he published an opinion piece in The Washington Post in which he called for “constructive engagement” between Iran and the United States. Since winning an election in June, the Iranian leader has also exchanged letters with President Obama and tweeted Rosh Hashanah greetings to Jews around the world.

Rouhani is set to depart Monday for New York to attend his first U.N. General Assembly as president. His predecessor, Mahmoud Ahmadinejad, caused outrage by using his U.N. appearances to cast doubt on the validity of Holocaust data and to question whether Islamist terrorists carried out the Sept. 11, 2001, attacks. Rouhani and Obama are to speak to the world body on Tuesday, raising the possibility of a face-to-face encounter.

Rouhani spoke Sunday at the opening of Iran’s Sacred Defense Week, which commemorates the start of the eight-year war between Iran and Iraq. The parade is held near the mausoleum of the Islamic republic’s founder, Ayatollah Ruhollah Khomeini, and Iran’s largest cemetery, where tens of thousands of troops killed in the war are buried.

Rouhani referred to the Iran-Iraq war in his speech but also sent a message about the conflict in Syria. Iran is a mayor ally of Syrian President Bashar al-Assad.

“We are against all wars and are ourselves a victim of war and invasion,” he said. “We tell all war­mongers not to consider another war in the region, as it will only bring them regret. War must be stopped by logic, politics and cooperation between regional countries.”

Rouhani added that to keep groups backed by al-Qaeda from becoming stronger in Syria, “we must try to bring the Syrian government and opposition to the negotiating table.”

Although he did not mention the U.S. government directly, Rouhani appeared to condemn the Obama administration’s frequent statement that “all options are on the table” in the conflict over Iran’s nuclear program.

“War and diplomacy have no relation to one another, and no free and logical nation accepts diplomacy and war on the same table,” the Iranian leader said.

The U.S. and other Western governments have imposed increasingly harsh sanctions on Iran because of its nuclear program. The West worries that Iran wants to make a bomb; Iran says it is seeking only to develop nuclear energy.

Meanwhile, Iran’s Revolutionary Guard Corps, a powerful wing of the military that has often opposed engagement with the West — especially the United States — gave Rouhani its conditional support ahead of his trip to New York.

The Revolutionary Guard said in a statement Sunday that it “supports any action in the framework of our leader’s strategies and our nation’s interests based on dignity, expediency and logic.”

But it also warned Rouhani and his foreign policy team that “historical experience necessitates that our country’s diplomatic authorities cleverly observe, with skepticism, the moves and behavior of the U.S. government.”