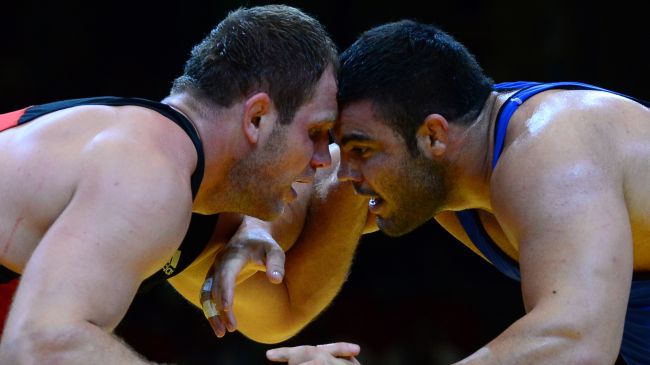 Iranian Greco-Roman wrestler Amir Aliakbari has bagged a gold medal in the 2013 World Wrestling Championships to help the national team stand in the fourth place of the event.

Aliakbari beat 2012 Olympic silver medalist Heiki Nabi from Estonia 4-0 in the final encounter of the category of 120 kilograms in the Hungarian capital Budapest on Sunday.

“A dream of mine has come true with this gold medal,” said the Iranian wrestler, adding, “This is the result of two years of hard work. Now I want to become Asia Champion in 2014 and Olympic Champion in 2016.”

Aliakbari was hardly challenged by Nabi and took four points in the first period, which proved enough to secure the victory.

The Iranian wrestler had outclassed opponents from Ukraine, Sweden, Germany, and Turkey before reaching the final.

Aliakbari had previously won the bronze medal in 2009 and gold in 2010 world championships in the category of 96 kilograms.

On Saturday, Taleb Nematpour gained a gold medal by earning a 5-3 victory against Iranian wrestler Saman Tahmasebi from the Azerbaijani team in the 84 kilograms category.

The Iranians finished their campaign in the fourth place of final team scores with 29 points. Russia, Korea, and host Hungary stood in the first to third spots, respectively.

On Wednesday, Iran’s national freestyle wrestling team won the championship of the tourney by gaining 46 points, 2 points adrift of second-placed Russia, followed by Georgia, and Ukraine.