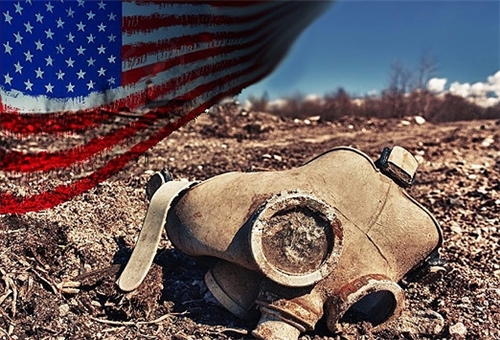 TEHRAN (FNA)- On August 26, 2013, John Kerry gave a rare and pointed speech in which he sent a clear message to the Syrian regime. “What we saw last week in Syria,” referring to the use of chemical weapons, “should shock the conscience of the world, it deifies any code of morality… It is a moral obscenity.” Barely able to contain his outrage, Mr. Kerry reminded the world that “This is about the large-scale, indiscriminate use of weapons that the civilized world long ago decided must never be used at all – a conviction shared even by countries that agree on little else.”

Earlier on that very same day, Foreign Policy published an exclusive investigative report that shows for the first time that how the CIA helped Saddam Hussein as he gassed Iranian troops and civilians from 1983-1988. The fact that the US and Western European powers, particularly Germany, France, and Italy, assisted Saddam during the bloody 8-year war with Iran is not new. It has been known that Western powers saw in Saddam’s aggression against Iran an opportunity to contain the Iranian revolution from spreading in the Arab and Islamic world. They provided intelligence to the Iraqi side in addition to hundreds of millions of dollars worth of military hardware, from tanks to jet fighters.

A top secret CIA document from November 1983 reported that “As Iraqi attacks continue and intensify the chances increase that Iranian forces will acquire a shell containing mustard agent with Iraqi markings. Tehran would take such evidence to the UN and charge US complicity in violating international law.” Reagan even dispatched Donald Rumsfeld to deliver his assurances that the US will continue to support Saddam Hussein’s war efforts. Unfortunately (for Rumsfeld), that visit is now a part of the public record along with that infamous hand shake with Saddam Hussein in December 1983.

Iran made two unsuccessful attempts during the war to present its case against Saddam Hussein to the United Nations Security Council. The documents further show that the US had meticulously detailed the use of the CW by the Saddam regime, but cynically rejected the Iranians’ claim because they failed to offer “persuasive evidence of the weapons’ use.”

The documents (see a series of passages below) show how “the United States,” as the authors of the Foreign Policy article assert, “applied a cold calculus three decades ago to Saddam Hussein’s widespread use of chemical weapons against his enemies, who at the time were and still are our enemies, and his own people. The Reagan administration decided that it was better to let the attacks continue if they might turn the tide of the war.”

Toward the end of 1987, the Iranian side began a massive build up around the Iraqi borders, planning the capture of the strategic city of Basra. The Department of Defense analysts were doubtful that the Iraqi side could withstand such a massive attack and believed that the fall of Basra was near. They were also convinced that with the fall of Basra the Iraqi military would collapse and Iran would win the war.

A report entitled “At the Gate of Basra” was presented to Ronald Reagan, warning him of the immanent danger of Iraq’s defeat. By this time, Reagan administration was full aware of Iraqi regime’s massive use of mustard gas, sarin, and Tabun nerve agent (also known as GA) against Iranian troops and civilians. Despite that full awareness, on the margins of the report, President Reagan wrote a note addressed to Secretary of Defense Frank Carlucci: “An Iranian victory is unacceptable.”

Throughout the 8-year war, the Iranian regime maintained a position against the use of chemical weapons. They remained committed to their international and humanitarian obligations and refused to develop or to use weapons of mass destruction, even during those days that retaliating in kind against Iraqi aggressors appeared quite tempting. Iran remains true to this position and has never developed a chemical weapons program.

One of the main justifications President Obama presented in his September 10 address on why the US must act against Syria was that if we don’t it will embolden Iran. “A failure to stand against the use of chemical weapons,” he pleaded, “would weaken prohibitions against other weapons of mass destruction and embolden Assad’s ally, Iran, which must decide whether to ignore international law by building a nuclear weapon or to take a more peaceful path.”

It would be helpful for President Obama to pause for a second and reflect on his comment. When the United States deemed the defeat of Saddam Hussein plausible, his predecessors and his allies supplied and covered up the use of chemical weapons to save the Iraqi regime. They worried that “any publicity about Iraq’s widespread use of chemical weapons could setback recent efforts to strengthen Iraqi-US ties.”

“Terrible things happen across the globe,” the US President opined, “and it is beyond our means to right every wrong, but when with modest effort and risk we can stop children from being gassed to death and thereby make our own children safer over the long run, I believe we should act,” Obama said near the conclusion of his address. “That’s what makes America different. That’s what makes us exceptional. With humility, but with resolve, let us never lose sight of that essential truth.”

The terrible thing about what the President says is that that we know that there is nothing essential about the truth that informs American policies abroad. One thing that the recent CIA documents about Iran-Iraq war make clear is the instrumental use of truth in American policy. There might be a case for American exceptionalism, but that case most definitely is not defined by the American commitment to any essential truth and unwavering defense of human dignity.

Is the conscience of Secretary of State disturbed by the release of these declassified documents? Is there any moral outrage or an ethical crisis in the White House that chemical weapons were used in order to advance the interests of the United States in the Middle East only 30 years ago? (Let us not talk about the use of depleted uranium in Iraq now).

In a perfect world, Mr. Obama would have appeared in front of the cameras and would tell the world that the recent declassified documents show that we had made a terrible error. We supported a regime that used weapons of mass destruction and helped that regime to hide its atrocities. We have learned from this past transgression and seek a better future. We commend Iran for showing restrain and for remaining principled during the war with Iraq by refusing to retaliate against Saddam Hussein with chemical weapons. Today Iran should play its crucial role in stopping the use of chemical weapons in Syria. Iranians paid a grave price when the “civilized” world remained silent against the atrocities of Saddam Hussein during the 8-year war. They must be a part of the solution in Syria, especially now that the chemical weapons are introduced in the theater of this savage war.