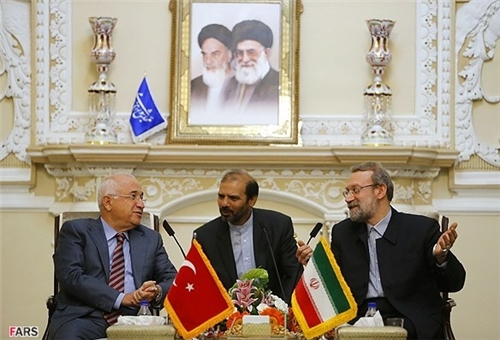 TEHRAN (FNA)- Turkish Parliament Speaker Cemil Cicek, in a meeting with his Iranian counterpart Ali Larijani in Tehran, strongly condemned the Takfiri terrorists’ continued brutalities against the innocent people in Syria, and called for the peaceful settlement of the crisis in the Muslim country as soon as possible.

The Turkish speaker said late on Saturday that the crimes committed by the Takfiri terrorists in Syria and other extremists in the region are against Islam, human principles and human rights.

Both Iranian and Turkish speakers vowed to try their best to encourage all sides involved in the Syrian crisis to participate in a comprehensive national dialogue to end the bloodshed in the Muslim country.

Cicek arrived in Tehran on Saturday at the head of a high-ranking parliamentary delegation to confer with his Iranian counterpart Ali Larijani and Iran’s President Hassan Rouhani ways to bolster Tehran-Ankara relations as well as the recent developments in the region, specifically the crisis in Syria.

On Friday, Cicek criticized certain western states for their double-standard policies towards terrorism in various countries, particularly in the crisis-hit Syria.

The Turkish speaker condemned the double-standard stances of the West towards Syria, and slammed terrorist actions in the country.

Cicek described the situation in Syria as totally unacceptable, noting that defenseless people including the elderly, women and children have been massacred and millions have become homeless, the Islamic republic news agency reported.

Late in May, a report said that over 500 terrorist cells and groups are now fighting against al-Assad’s government in different parts of Syria.

The Palestinian Almanar weekly quoted informed sources as saying that the size of these networks and the number of their members varies depending on who is sponsoring them.

The sources, who asked to remain anonymous in fear of their life, added that over 85% of these criminals are non-Syrians who have come from different continents and have been recruited by Saudi and Qatari spies and later trained in special training camps in Turkey.

The weekly added that these networks are receiving Israeli made weapon cargos paid by the Persian Gulf Arab Sheikhs.

The sources also said that these terrorist cells and groups are paid salaries for operations in Syria.

The Syrian crisis began in March 2011, and many people, including large numbers of soldiers and security personnel, have been killed in the violence.

In an interview broadcast on Turkish television in April, President al-Assad said that if the militants take power in Syria they could destabilize the entire Middle-Eastern region for decades.